REVENGE OF THE ROCKVILLE MALL!

Is there anyone with nostalgia for the Rockville Mall? I have some for two reasons: A) To the best of my recollection, I never entered the mall, and my parents never took me there, either. Which pretty much sums up why it was a failure, I guess.  And, B) Where are all the photos and videos of the mall? The attempt to sweep the memory of the Rockville Mall under the rug is understandable, but there are as many photos of the mall on the internet as there are of the Ancient Aliens. Less, actually.

I've heard there was a Friendly's restaurant and video arcade in there. Which probably suggests they didn't market the mall very well, as those would have been draws for me!

I was too young to know the blow-by-blow management decisions made by the mall operator(s) over its short history. Could it have been turned around? Was it as hopeless as we hear it was today? The most fundamental flaw in the mall's design (in my opinion) was its distance from the interstate, relative to well-situated I-270 cousins Montgomery Mall, Washingtonian Center, Lakeforest Mall, and Milestone Shopping Center. It also lacked the surface parking all of its competitors had (although that never stopped Mazza Gallerie).

But the demolished mall isn't going quietly into the good night. Instead, it's reaching back from beyond the grave to take a small measure of revenge on the developer greed that fueled its destruction (the same greed that fueled its construction, and the demolition of Rockville's historic town center). At the last meeting of the Rockville Planning Commission, representatives of the Duball I and II projects on the former mall site said their construction was slowed after excavators ran into the caissons of the Rockville Mall deep underground. (These are watertight support structures that are typically anchored in solid bedrock). They said they anticipate they will encounter similar structures when they dig for the second tower.

In an ironic moment, commissioner Charles Littlefield lamented the lack of men's apparel options in the city, options an indoor mall typically provides.

Yet, the most puzzling point of the meeting for me was after commissioner Jack Leiderman asked Duball's attorney the $64000 question: How many more residents will be added to the Duball site if the developer gets the reduction in unit size it's asking for?

The Duball attorney could not answer that question. It just seems inconceivable that a developer would not know the answer to that question at this late stage. In fact, the answer is part of the financial calculation that spurred the request in the first place. This is a change that will require full disclosure, and consideration of the impacts on roads, schools and nearby neighborhoods.

[By the way, if anybody out there has photos of the Rockville Mall, email them and I will post them here on Rockville Nights.] 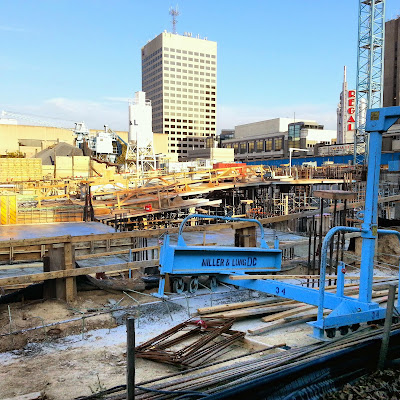