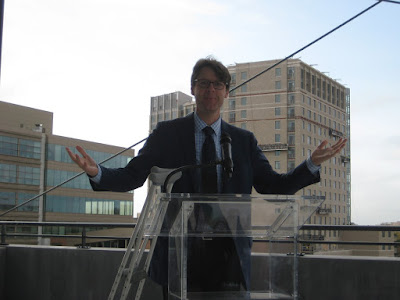 Montgomery County's public schools and roads are already filled to overcapacity. The promise that unfettered residential growth would generate massive tax revenues has given way to the reality of a massive structural County budget deficit. Despite all that, County Councilman Hans Riemer wants to pack in as many more new residents as possible.

During a recent Twitter discussion, Riemer said he wanted to pursue a zoning change that would allow single-family home properties in the county to be subdivided into two residences, in the form of duplexes. Given that today's smaller families would easily fit into a duplex unit, Riemer's plan would massively increase the student generation rate in existing neighborhoods. Not to mention the impact on MoCo's traffic congestion, already rated the worst in America.

Riemer's exchange with pro-urbanization blogger Dan Reed requires some background to fully appreciate. Reed was at one time a staff member in Councilmember George Leventhal's office. Leventhal infamously called the suburbs "a mistake," and in a 2010 television appearance, displayed a rendering showing a single-family home being replaced by an apartment building. This dystopian vision for urbanization of existing SFH neighborhoods is one of the worst-kept secrets of the Montgomery County political cartel.

The bulldozing of single-family homes at the edges of current and future urban centers in the county will begin in areas where real estate values are lower - Aspen Hill, Twinbrook, Glenmont, Wheaton, and White Oak, for example. But what about places like Chevy Chase, East Bethesda and "Westbard," where teardowns get replaced with two-million-dollar homes? It's unlikely a development firm could afford to buy blocks worth of such homes in the 20814 and 20816 zip codes.

Reed memorably lamented this obstacle to bringing urban density to the suburbs a few years ago, and proposed a solution of converting large luxury homes (often derided by critics as "McMansions") into what would essentially be boarding houses with multiple units inside (however, it was not clear what sort of nuclear armageddon, Maoist cultural revolution, or similar catastrophe would have displaced the wealthy families who currently reside inside these homes).

So as Reed contemplated the million-dollar home obstacle in Chevy Chase again in late December, Riemer had a bright idea - what about duplexes? Twice the strain on schools and roads, and twice the drain on County revenues. What's not to like, right?

For a guy who voted to urbanize the established, low-density "Westbard" area of Bethesda, while falsely claiming it was a "mile from two Metros," such zeal for overcrowding doesn't surprise.

Duplexes are considered lower-class, not desirable. And Riemer asked if there are "market examples" of duplexes in Montgomery County. He's obviously never made it to Aquarius in Aspen Hill, or Berry Street near Glenmont, to name just two. Not surprising for a guy who needs a GPS to find his way around the county. But those were new developments - Riemer is proposing retrofitting the whole county for duplexes. Good luck with that.

"I am going to look into this further," Riemer vowed. Given his disastrous record on liquor reform, food trucks, the "nighttime economy," and cybersecurity, those words are your cue to either chuckle...or run for the hills.
Posted by Robert Dyer at 8:08 AM