Montgomery College President DeRionne Pollard justified her expensive, taxpayer-funded security detail by saying she needed protection as someone who will take controversial political stands. Pollard is delivering on that promise in the college's Fall 2017 course catalog. A "new" offering, "Right Wing Movements Today," has a course description that falsely claims that Americans to the right of the political spectrum embrace "political violence and totalitarian models."

I've seen a lot of course descriptions, but this has to take the cake as the most intellectually-shallow and biased yet. It is spreading "fake news" as history, and smearing about half of the country in the process. The reality is that the only victim of physical political violence in Montgomery County was a Donald Trump supporter, and that 99% of the national violence during and after the 2016 election was carried out by left-wing groups, led by the ultra-violent Antifa. Yet, there is no course offering this fall on the "left-wing embrace of violence."

Perhaps the worst thing we can do in these fractious times is to simply cut off debate and dialogue with those we disagree with. Even worse is to base your arguments on fictitious lies. Worst of all is using a taxpayer-funded platform to do it.

This course is reminiscent of the attempts by the Montgomery County Council to create an atmosphere of fear and hate after last November's election. That directly led to violence against a Richard Montgomery High School student. "LL 177" is spreading its own brand of hate, at taxpayer expense. And by incorrectly teaching students that one side of the political spectrum is "violent," the course helps to dehumanize those Americans, which actually facilitates and encourages more left-wing violence of the sort we've seen in Berkeley, Chicago and elsewhere. This is not productive or constructive in any way.

The professor may not agree with their positions or ideas, but right wing groups ranging from Republicans to the "alt-right" do not "embrace violence." Teaching students otherwise is morally bankrupt. 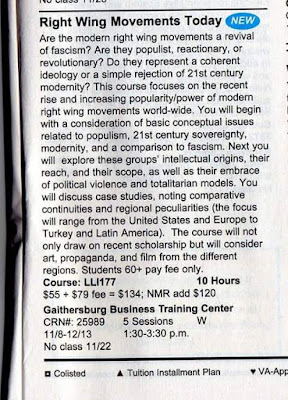