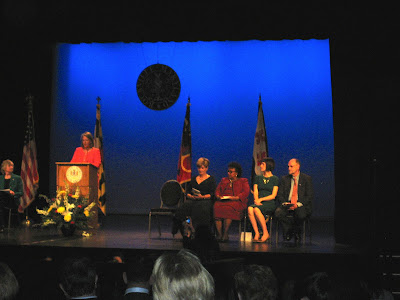 There was some irony present as McGuckian noted both that the Mayor and Council remain a four-woman/one-man body again this term, while - historically - the City's first elected commissioners were chosen by 66 white male voters.

Incumbent Mayor Bridget Donnell Newton was sworn in for a second term by Montgomery County Clerk of the Court Barbara Meiklejohn. Newton then swore in her Council colleagues Beryl Feinberg, Julie Palakovich Carr, Mark Pierzchala and Virginia Onley.
In her remarks following the swearing-in, Newton first acknowledged Friday's terror attacks in Paris. Noting that it is "a very tragic time in our world," she said, "we mourn with those who face this tragedy." She used the words of John Wesley to sum up the approach she hopes she and the Council will take - "Together we can."

After listing some accomplishments of the Mayor and Council's previous term - including negotiating an adequate gym for students at the future Richard Montgomery Elementary No. 5, tackling a compensation and classification review after 6 years of stagnant city salaries, and reviving walking town meetings - Newton cited the recent film Bridge of Spies as representative of the cooperation they will have to work toward in this term.

"If they can end the Cold War," Newton said, "we can come together as the governing body of Rockville." She added jokingly that City staff might also be able to go home before midnight on Monday nights. That drew knowing chuckles from many in the crowd who have sat through marathon Mayor and Council meetings in recent years.

Newton promised the Rockville of the future would be "multi-generational, multi-ethnic, multi-priced." She added that the Rockville Pike Plan and citywide Master Plan need to consider the City as a whole, not in isolated "segments." The Pike Plan also mustn't "put City taxpayers on the hook for rights-of-way," she said.

In reference to the debate over how much the City should change its character under pressure from developers, Newton said Rockville doesn't "need to change who we are, as much as we need to trust who we are."
The theme of trust carried over from the final part of Newton's speech to a spoken-word performance by Richard Montgomery High School junior Alex Haddad.
One of the most prominent clerical leaders in modern Rockville history, Mansfield Kaseman, also picked up on the trust theme in his closing remarks. "Let us go forward a trusting and very grateful people," Kaseman said, exhorting citizens to resign themselves to not merely being "bystanders, but up-standers."

"Together, we can, and together we will, do great things for Rockville," Newton vowed.

Following the ceremony, which included a Rockville Police color guard, attendees gathered in the lobby for a reception.