Rockville's Mayor and Council were briefed on the Maryland State Highway Bus Rapid Transit (BRT) Study study for the Veirs Mill Road corridor last night. All of the options most likely to be considered for final selection by the SHA will have impacts on private property, and could end up worsening traffic congestion rather than easing it.

The driving force behind the BRT push? Certain (not all) commercial property owners along Veirs Mill, who would be able to redevelop their land into mixed-use town centers with transit-oriented height and density. Ironically, most of the future "growth" cited as justification for BRT will only be possible with the addition of BRT. And, like the placeholder schools that never get built, BRT will be counted under ever-more-laughable MoCo traffic studies as phantom capacity to reduce fees and restrictions on developers. In fact, the County Council is on the verge of weakening traffic standards yet again. Under a system that allows an empty bus to count as though there is now capacity for 50 additional cars, God help us.

While the main route is between the Rockville and Wheaton Metro stations, consideration is also being given to extending the BRT to Montgomery College. The SHA will hold a public meeting on the study on September 28, at 6:30 PM, in the Montgomery County Executive Office Building cafeteria at 101 Monroe Street in Rockville. Feedback from residents at that meeting will factor into the final SHA recommendations, which will be presented to the Mayor and Council at their October 10 meeting.

Beyond the no-build Alternative 1, the first option is Alternative 2, which would not provide dedicated lanes for BRT, but would give the buses signal and position priority at certain intersections.

Dedicated queue jump lanes that would be added at some intersections "may require additional right of way with impacts to property in Rockville," according to the report. With queue lanes, Metrobus Route Q9 would get signal priority at those intersections, but otherwise operate in mixed-traffic along the entire route. The report does not give a detailed explanation of how lights can be properly synchronized (already a weakness in Montgomery County) if buses are forcing the lights to change at random intervals.

For Alternative 3, the third through or turning lane of each side of Veirs Mill (where they currently exist) would be seized from automobiles, and turned into a dedicated lane for buses only. The report is deceptive about this fact. It shows Veirs Mill as a two-lane-per-side road only, and purports that "a lane is added" for BRT use. That is simply not true for the entirety of Veirs Mill Road. Yes, they will add a BRT lane where there are only two lanes. But on parts of Veirs Mill, they will be seizing a lane. Eastbound, a through or turning lane would be seized "in the vicinity of Atlantic Drive and the Twinbrook Shopping Center and continue...all the way to Wheaton." A significant portion of the last stretch between Connecticut Avenue and Wheaton currently has three through lanes open to cars in one or both directions today.

Traffic congestion caused by reduced capacity in those spots would have a referred impact up and down the road, as any traffic jam does, worsening congestion in the corridor. Add in the new high-density development BRT would permit, and the thousands of new cars that would bring, and you have a recipe for disaster.

It is also unclear how a third lane - and a bike lane, and a multi-use path, based on the diagrams shown here - could be added on the outside of two-lane stretches where access roads today exist for residential homes on Veirs Mill. The report doesn't detail what will happen in those cases, which are numerous along the road.

Loss of a third lane will reduce vehicular capacity on the affected parts of Veirs Mill by 33%. The highest, rosiest claim for how many drivers would "get out of their cars" and switch to BRT was 16%. When you simply do the math, you find that BRT will not only not improve traffic flow (other than getting oft-stopping buses out of the second lane where Veirs Mill is only two lanes), but will actually leave drivers with a net loss in total road capacity. 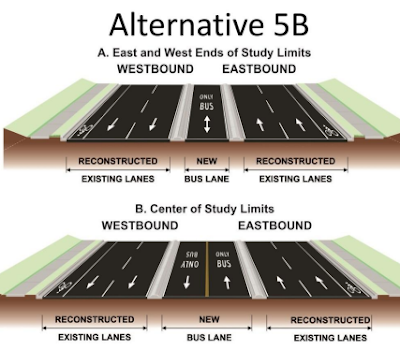 A Cadillac option, Alternative 5b, would mostly solve the problem of reduced capacity by creating new, separate lanes for BRT in the center of Veirs Mill, rather than taking existing traffic lanes. The dedicated center lanes would have to drop to a single lane between First Street and Atlantic Avenue. Not solved with this option is the eminent domain threat to private property. Rebuilding the entire length of Veirs Mill Road and adding bus lanes would require condemnation of property along the corridor. The report also ignores the potential need to relocate utility poles along Veirs Mill, a very costly proposition.

At the high price and low ridership forecasts for BRT, there appears to be no sensible argument in favor of it.
Posted by Robert Dyer at 8:00 AM