It was standing-room-only last night at the Bauer Drive Community Recreation Center, as residents from Rockville, Aspen Hill, and other neighborhoods near the Blair Ewing Center turned out to oppose a potential school bus depot at that school site on Avery Road. Citizen association leaders, activists, and a handful of elected officials were in attendance, and unified in one message to Montgomery County officials - no bus depot at Ewing, which also has a public park, and is adjacent to the environmentally-sensitive Rock Creek watershed.

The meeting was moderated by Aspen Hill Civic Association President Jamison Adcock, who fought this battle to save Blair Ewing from demolition along with a citizen coalition once before, just a couple of years ago.


"This whole issue
is a mess"

Last night's meeting was a success in terms of the objective for holding it - to clearly demonstrate the strength of the community opposition to a depot at the Ewing site. But citizens are still very much in the dark as to what the County's next move will be on the depot site selection, as well as the specifics on the secretive deal the County worked out with a developer to redevelop the existing bus depot in Shady Grove.

"We're trying to figure out how much money is changing hands," Adcock said, adding that residents can only estimate the County will receive about $30 million for the site from the developer. A memo dug up from 2009, written by then-Montgomery County Public Schools superintendent Jerry Weast, had called for the County to build a new depot and estimated the cost at $100 million - not including the expensive proposition of acquiring land. "I'm going to venture to guess it will cost even more," Adcock predicted, noting the size of the loss taxpayers would take if those numbers prove correct.

One resident pointed out that the $100 million figure was in 2009 dollars, and would be substantially higher with post-recession construction costs.

Adcock said MCPS had stated a depot would require 35 acres. The Ewing site is only about 22.5 acres in size. Only 16 of those are buildable, as 7 acres are in a forest preservation easement. Of the dangers to Rock Creek, Adcock said the stream valley park is "one of the things that makes the quality of life in Montgomery County special."

While Aspen Hill would not be as directly effected by the noise and immediate fumes of buses at Blair Ewing, it is widely suspected that the County would try to move the special programs at Ewing to English Manor in Aspen Hill. That would prevent what the community wants, which is to reopen English Manor as a public school, to alleviate overcrowding at Aspen Hill-area schools. Aspen Hill would likely also feel the traffic backups that would result.

Another resident noted a recent traffic study, which showed that Norbeck Road cannot handle any additional traffic. When one attendee described her nightmare commute to Fairfax County, which begins on Norbeck Road, another commuter concurred. "I, too, drive to Fairfax County, where I'm considering moving because of this." Recalling a bus crash that blocked 2-lane, rural-esque Avery Road for hours during icy conditions, he added, "God forbid it should snow." Of the whole bus depot at Ewing idea, he concluded: "It's a disgrace. It's a disgrace."

Adcock agreed with the assessment of Avery, saying it is "the closest thing we have to a twisty country road."


"A tragedy
waiting to
happen"

Also complicating matters for the community, is that they won't really know exactly what they are fighting until the County releases its new assessment of potential sites in the next month or so. The only ones publicly known are Ewing and a former landfill in Olney; the latter is across the street from single-family homes.

Adcock and other civic leaders said that, for now, all they can concentrate on is continuing to demonstrate their opposition at public forums like the County Council Town Hall next Wednesday at Rosa Parks Middle School in Olney.


"I drive to
Fairfax County,
where I'm
considering
moving because
of this"

In the meantime, residents and politicians alike lambasted the County for what all agree was a terribly-executed idea to redevelop the industrial area around the Shady Grove Metro station.

Katz, who was not on the Council when the bulk of the so-called "Smart Growth Initiative" related to Shady Grove was approved by the body, is also one of the few who candidly acknowledges he voted for the bills that approved funding for two highly-unpopular depots in Rockville. Both sites ended up being taken off the table after residents organized and fought back, but funding for depots at Carver and Westmore were indeed unanimously approved by the County Council in the last two years.

"I voted for that, and I was very sorry I did," Katz said of the budget bill approved for construction of a depot at Carver. In contrast, Councilmember George Leventhal stated publicly that he did not read the Carver bill before voting in favor of it, a stunning admission of reckless irresponsibility by a legislative official. How many other bills has Leventhal voted for without reading, one has to wonder?


"Who is going
to profit from
this, so we know
who to go after?"

"Illogical, ill-conceived, irresponsible." That was how Delegate Ben Kramer described the prospect of a bus depot at Blair Ewing. Kramer, who has virtually no authority to step into a County matter like the depot, can be expected to get called up from the minor leagues by the County political machine if term limits pass and five councilmembers are ousted. He said buses on a road like Avery would be "a tragedy waiting to happen."

Chiming in on the earlier concerns about the already-bad congestion on Norbeck Road, Kramer said, "You know the traffic nightmare that is Norbeck Road." Ironically, some of that congestion can be blamed on the delegate's father, Sid Kramer, who canceled the Rockville Freeway despite admitting the road would indeed reduce congestion.

Referring to the lack of information that was foremost on the minds of many, Carver Coalition volunteer Theresa Defino said, "We need to stop guessing what is going on." She advised the crowd to press the County Council and Executive to have an open process on the depot site selection this time around. Defino said public hearings should be signed before a site is chosen or purchased, not after, as happened when the County secretly purchased the Westmore/WINX property for $12 million prior to a public hearing.

Representatives of the organization Preserve Rock Creek were also in attendance.


"We're not
going to
roll over"

But leave it to residents to put things in the clearest terms.

"Who is going to profit from this, so we know who to go after," one asked, delivering the quote of the night, during a question-and-answer session. (Hint: the developers, and the politicians who get checks from them - 82% of the campaign funds received by the Council comes from developers. Councilmember Marc Elrich does not accept contributions from developers, it should be noted)


+ + +
Here is a series of photos panning around the room to show how packed it was. The crowd overflowed out into the hallway, which can't be seen in these photos. 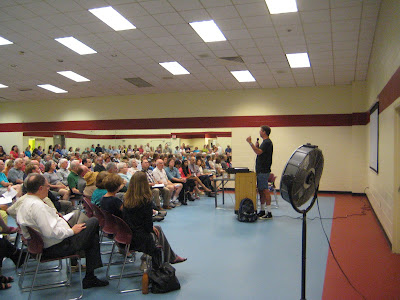 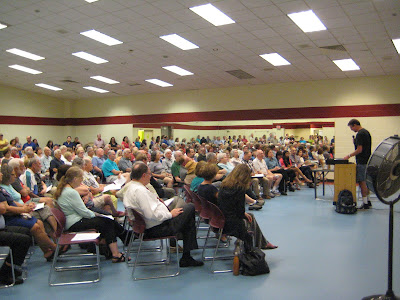 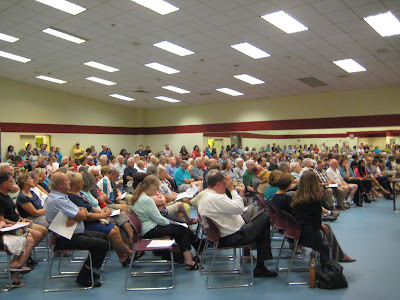 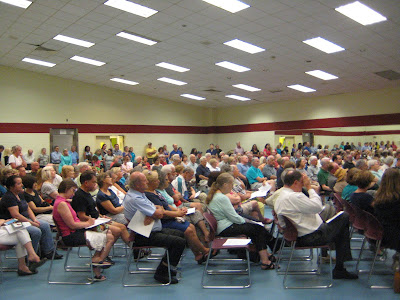 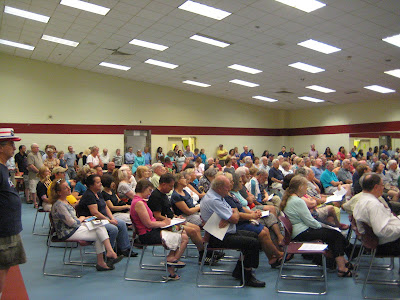 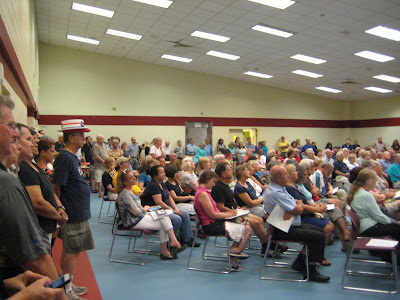