King Farm could lose more future jobs if the Mayor and Council approve yet another request to convert planned office space in the development to residential. Developer Penrose Group is seeking the change, to allow construction of a condominium building and a series of "triplexes" on sites currently reserved for office space. The Mayor and Council will hear testimony on the proposal during a public hearing at tonight's meeting, which begins at 7:00 PM at City Hall. 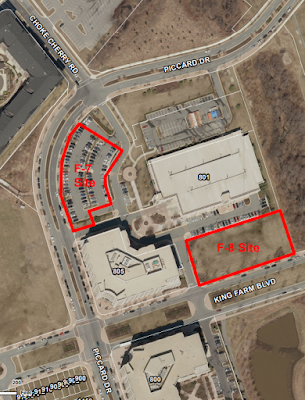 120 of the housing units would be in a condo building at Piccard Drive and Choke Cherry Road, and 42 more would be in triplex homes on King Farm Boulevard. The units would be within the total number allowed by the King Farm master plan; 3,329 housing units have been constructed in King Farm so far, and 3600 units is the total permitted.
However, the provision for office space in King Farm was designed to reduce traffic congestion by creating more job opportunities for residents of the development and the city. Swapping those for residential keeps all of the current commuters on the road, and adds the new residents who will commute in the morning.

While claiming that the revenue will help the City or County is perhaps the oldest canard in the developer PR handbook, the reality is that office developments create more net revenue for governments than residential. Not only does residential generate students for already-overcrowded public schools, but also requires the delivery of government services. In contrast, people working in the kind of offices you find in a place like King Farm are less likely to require government services. They not only may live outside of the jurisdiction, but also are probably making a decent white-collar wage and can support themselves.

The proposed change has been endorsed by the King Farm Citizens Assembly, and by a number of nearby landowners and developers.
Posted by Robert Dyer at 8:36 AM