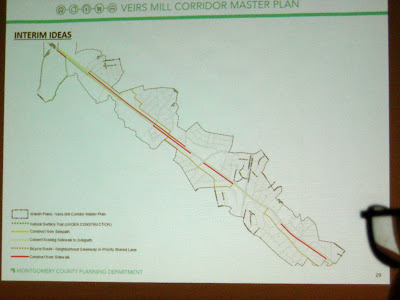 Ready or not, here they come. Montgomery County planning officials say no decisions or firm proposals have been formulated yet in the development of a Veirs Mill Corridor master plan. But analysis of the most-emphasized talking points at last night's community meeting give us an early hint of what they have in mind. Pedestrian and bicycle improvements were stressed the most, but achieving those may be a source of stress for home and business owners - and commuters - along the busy state highway. 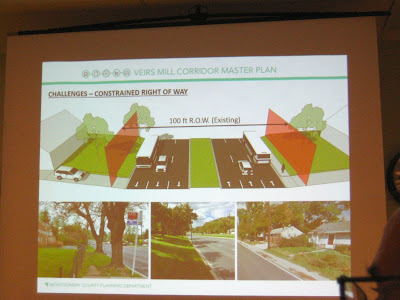 Planners showed an existing Veirs Mill right-of-way that is constrained to as narrow as 100' along stretches near Wheaton. They said a new 120' width would be needed to accommodate all of the pedestrian and cycling amenities they hope to add to the road. That would require taking of property in at least some places. For that reason, planners said they are looking at ways to shrink lanes and the center median instead. Asked if business owners in the commercial areas along Veirs Mill would be threatened by any specific project, planners said it was too early to answer. But, they added, that they would try to use the same alternative methods of creating more space within the existing curbs as they will in residential areas.
One problem last night was the graphics which show homes tremendously set back from the road, as you might see in a rural area with front yard septic tanks. In reality, the proposed widening idea would have bicycles whizzing past living room windows in spots where homes are already perilously close to traffic. There would also be a massive loss of mature trees that currently process the exhaust emitted along the road. Utility poles would be another significant challenge. A future 120' right-of-way was first proposed by the latest Kensington-Wheaton master plan. 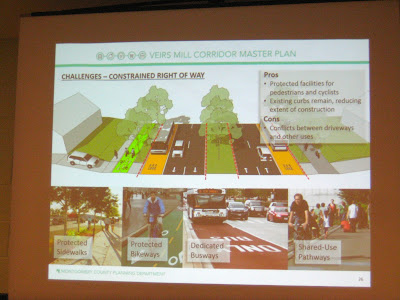 Among the projects planners want to shoehorn in on Veirs Mill are Bus Rapid Transit lanes, separated bike lanes, and shared-use paths. They also want to install sidewalks where there are none, shown in the red lines in the photo at the top of this article. And like BRT proponents in County government, they're also entertaining the possibility of seizing one traffic lane in each direction for use as BRT lanes. 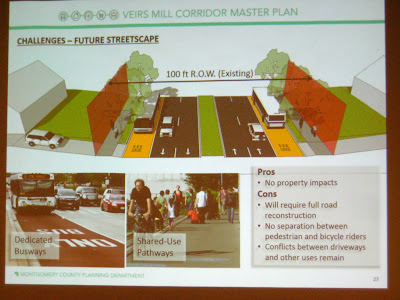 Losing 33% of vehicle capacity along often-slow-moving Veirs Mill was strongly opposed by attendees at last night's meeting.  "Taking out a lane on Veirs Mill, you're just causing a problem," one resident said. Likewise, homeowners right on the road were displeased to hear about big plans for their already-short front lawns. "That's my house!" declared one 60-year resident of Veirs Mill Road upon seeing her home in a photo planners probably now regret including in the Powerpoint. "How do you get that? That's my property! You're taking my property and reducing the value of my house by a pile!"

While new sidewalks, paths and bike lanes are being sold as needed safety features, the plan remains one actually driven by development interests more than safety interests. As urban planner Jessica McVary acknowledged at the outset of the meeting, this is the first master plan to be a roadway corridor plan. To be realistic, the main reason this plan exists now and the process is underway, is to benefit property owners such as Halpine View.

The fact is that the more paths and bike lanes there are, the larger scale the redevelopment of shopping centers and garden apartments along the corridor can be. That's because the latest way County officials have cooked the books for developers is to count all forms of transportation as capacity, instead of just vehicular capacity. So bike and transit facilities, even if they are lightly used, count fully the same as road capacity. This would allow developers projects of greater density than would be possible if roadways actually received the failing grade they otherwise would.

Impacts on automobile commuters already enraged by traffic congestion appear to be low on planners' priorities. McVary said they will actually make "a decision whether more congestion could be handled" by drivers on Veirs Mill, suggesting that making traffic jams even worse would improve safety for cyclists and pedestrians. A County transportation official in attendance promised the plan would also contain recommendations for lower speed limits, and new speed and red light cameras, cash cows for the corrupt County Council.

The only hope drivers and those who could be impacted by property takings have are that a different County Council will have been elected by the time this plan would be implemented, and that the capital budget costs of installing these improvements will be especially high. Most of Veirs Mill is single-family homes, cutting out the possibility of developers picking up the tab as they would in a totally-redeveloping urban area. And the County Council, facing massive debt loads they've created (debt service would be the third-largest government department in the County if it was a department - yikes!), just moved to slightly reduce how much additional debt the County can take on in the future. That will be a major drain on many capital projects.

"We need a constituency" to get these sidewalks and lanes for bikes and buses, Master Planner Supervisor for Area 2 Nancy Sturgeon said, and residents will have to lobby their elected officials to get it done if they want them. "This is going to end up being a large public-sector project," she predicted.
Posted by Robert Dyer at 1:14 PM