Police searching for man who vanished in Rockville 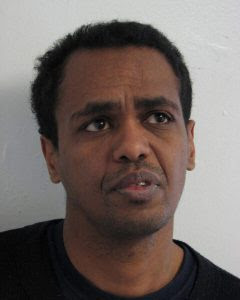 Montgomery County police are asking the public's help in locating a man who vanished in Rockville last month. Tibebe Yorannes Shenkute, alias "Michael Johnson," is described by police as a black male, 5′ 6″ tall, weighing 150 pounds, with brown eyes and black hair. When he was last seen in Rockville, he was wearing a brown pullover jacket, sweater, button-down shirt and pants (with no confirmed descriptive colors).

Shenkute is a former resident of Rockville, but had been recently staying in Gaithersburg. He is also known to frequent the Silver Spring area. Police and his family are concerned for his welfare.

Anyone with information regarding Johnson’s whereabouts is asked to call the police non-emergency number at 301-279-8000.
Posted by Robert Dyer at 8:00 AM