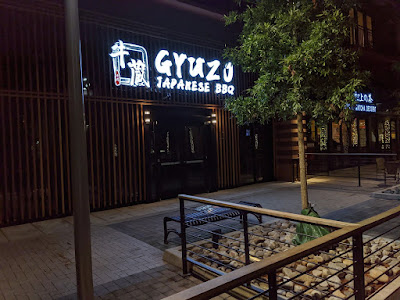 The Montgomery County Council unanimously approved an executive order banning indoor dining yesterday. Interestingly, the Council did not put out a press release to trumpet their vote, a vote that angered many in the hospitality sector. In response, Gyuzo Japanese BBQ at Rockville Town Square was forced to immediately close for the duration of the ban, and to lay off employees ten days before Christmas.
Due to the restaurant's concept of cooking food at your table, the impact is most severe at Gyuzo. Other restaurant tenants at RTS are soldiering on with tents and heaters, like Finnegan's Wake. Gyuzo is not alone in closing as a result of the indoor dining ban; Tastee Diner, a Bethesda institution for decades, also announced it was closing until the ban is lifted. That could potentially be spring at the earliest.
Posted by Robert Dyer at 8:00 AM