Word that testing of McDonald's chicken wings - known as "Mighty Wings" has expanded to Chicago naturally is generating speculation about a nationwide rollout.

Of course, so did McPizza.

But these wings aren't so new. A previous test years ago included some DC area McDonald's. I had some myself. My vague memory is that they came in a white cardboard container, and were called Mighty Wings then, too.  And that they were fairly good wings.

If you can add to that recollection, please leave a comment below with your memories.

I don't recall the sauces available. But word that McDonald's won't have special sauces, and use the current ones instead, is cause for concern. As big a fan of McDonald's nugget sauces as I am, when it comes to wings, Blue Cheese is an absolute must! 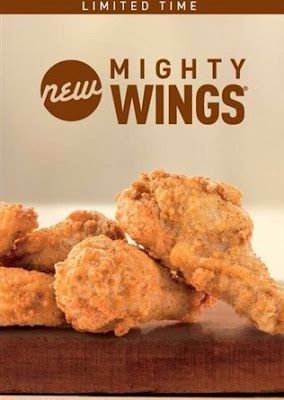