The unique building at 255 N. Washington Street, known as "The Pink Bank," is now almost certain to be demolished.

A bid to forestall demolition, via a possible historic designation process, failed at last night's Rockville Mayor and Council meeting by a vote of 2-3.

Councilmembers Tom Moore and Mark Pierzchala voted to allow the study of historic designation. Mayor Phyllis Marcuccio concurred with Councilmember John Hall's assertion that such a process would waste people's time, because neither would support historic designation in the end anyway. Moore responded that both officials - and possibly himself - would be out of office by the time such a vote would be taken.

Originally the Suburban Trust bank building, it was built in 1965 and designed by architect Arthur Anderson. Some interior office space was reconfigured by another prominent Rockville architect, John Sullivan. Its singular design is an example of New Formalism, and I'm not aware of another example of it in the city of Rockville.

I agree with the comments of Rockville Historic District Commissioner Jessica Reynolds, who contrasted the landmark Pink Bank with the majority of today's Montgomery County architecture, which "all looks the same: cookie cutter."

Reynolds made the motion to recommend starting the historic designation process, which passed unanimously at the HDC's September meeting.

Most of today's new buildings could be anywhere. This stands in stark opposition to developers' claims that dense urbanization of the suburbs will establish a "sense of place" they somehow believe is lacking in decades-old suburban neighborhoods.

As HDC Chair Craig Moloney said, we are too quick to "throw our buildings in the dumpster." 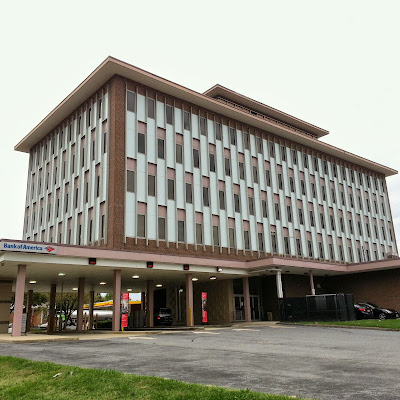