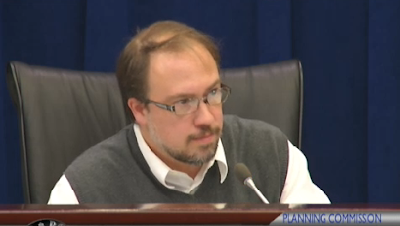 Rockville Planning Commissioners tackled a few unresolved matters in the Rockville Pike Neighborhood Plan last night, and hope to transmit it to the Mayor and Council once final edits can be completed and a vote be held. While the commission's transmittal letter was the subject of some discussion, commissioners have suggested presenting the letter in-person to the Mayor and Council so that it does not end up getting lost (figuratively, more than literally) in the all of the paperwork.

The first question to settle was whether to keep building height descriptions in stories, feet, or a hybrid of both. Stories was the choice after a 4-2-1 straw vote, with commissioners Jack Leiderman, and Don Hadley dissenting, and Chair Charles Littlefield abstaining.

A second question was how to describe the City's goal for its jobs-to-housing ratio in the plan. Littlefield's proposed statement was considered too competition-oriented toward other job centers in the region by commissioners Anne Goodman and Gail Sherman. One point of reference was Rosslyn, which had nearly five times the number of jobs per housing unit as Rockville does.

Long Range Planning Chief David Levy cautioned commissioners to be careful in emphasizing a higher ratio than the City has today. Places like Rosslyn have buildings far taller than the commissioners have said they are comfortable with for Rockville, he noted. Ultimately, the commission decided the final language should seek to maintain the current mix, to ensure the City doesn't become a bedroom community.

Building heights have remained controversial throughout the Pike Plan process. But Leiderman was surprised to find that one issue the Commission resolved did not appear in the plan. At an earlier worksession, commissioners had agreed to limit residential heights to 7 stories, and commercial heights at 10 stories.  But only the 10-story limit appeared in the plan's text.

Leiderman made a motion to restore the distinction, which passed 5-2, with commissioners John Tyner and David Hill dissenting.

Vision Zero, a global movement to eliminate traffic-related deaths by 2024, won't be in the plan, however. Commissioners voted 6-1 to omit the specific phrase "Vision Zero" from the plan. Littlefield cast the sole vote in favor of including it. No one stated a specific objection to the Vision Zero concept prior to the vote, but indicated they did not want to use the terminology.

Levy said that, while he might be speaking out of turn, he was sure the Mayor and Council would want to hear directly from Littlefield in person, when the commission officially signs off on the final plan.

Leiderman asked if the Mayor and Council would have to hold the one required public hearing after making substantial changes to the Plan, rather than before they deliberate. Staff said the law allows them to hold the public hearing at whatever point in the 150 day approval process they wish. That would mean the public might not have a say on any such changes, should they hold the hearing first.
Posted by Robert Dyer at 8:59 AM