Mayor and Council authorize MOU for I-270 noise barrier 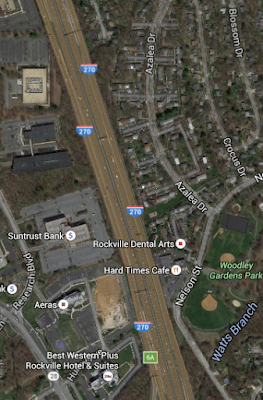 Noise relief for some along the I-270 corridor in Rockville is a step closer this morning. Last night, the Mayor and Council voted unanimously to authorize a memorandum of understanding (MOU) between the City and the Maryland State Highway Administration to construct a 2,609' Type II noise barrier wall along the east side of the interstate.

There's no indication of the exact start and end points of the wall, other than the stipulation that it begins "at the interchange." Proximate neighborhoods include West End Park, Woodley Gardens and Regents Square.

The barrier, which is currently being designed by the SHA, will begin at the interchange with W. Montgomery Avenue (MD 28) and continue northward for about half a mile. It may require land acquisition by either the SHA or the City.

SHA will pick up 80% of the design and construction costs; the remainder will be paid by the City to the SHA in installments that must be paid within 30 days.

Mayor Bridget Donnell Newton noted after the vote that had the barrier been constructed when originally sought several decades ago, it would have been far cheaper to build.
Posted by Robert Dyer at 10:00 AM