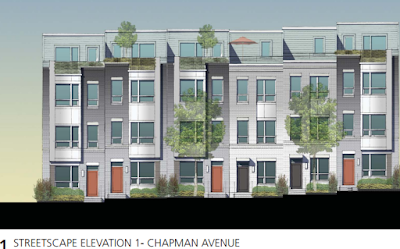 The Rockville Planning Commission unanimously approved a major site plan amendment for the 1900 Chapman Avenue mixed-use project last night. That amendment replaced a 339-unit apartment building with 61 townhouses. A second apartment building on the north side of the property, which is bordered by Thompson Avenue, the CSX railroad/WMATA right-of-way, Twinbrook Parkway and Chapman, remains in the plan. That building will hold 319 rental apartments, some office space, and in the future, potentially 3 to 4 retail spaces on the ground floor, according to the applicant's attorney, Nancy Regelin.

A new internal street, for which commissioners approved the name "Thompson Crescent" last night at the suggestion of Commissioner John Tyner, will provide access to both the multifamily building, and the townhomes. On the townhome side of the property, the street will function more as an alleyway, with the fronts of the townhouses facing the outward edges of the property.

The arrangement concerned several commissioners, particularly the homes that would front onto the railroad tracks to the east, and toward busy Twinbrook Parkway to the south. Noise concerns raised during the original 2-building application resurfaced last night. Commissioner Jack Leiderman noted that the new footprint of the townhomes was closer to the railroad tracks than the building they replace was to be. Regelin said construction materials and insulation would ensure noise levels inside the homes do not exceed the required limits.

In fact, some on the applicant's team pronounced the railroad proximity as a selling point for train buffs. There is a second factor near heavy rail facilities such as this, though. If you've ever been even a block or more away from freight trains, you know that there is also a tremendous amount of vibration through the ground and of structures as they pass. I wonder if the materials and construction of the homes are also designed to reduce vibration, as well.
Leiderman also questioned staff as to whether or not the requirement for 15% open space was being met by the new site plan. As you can see in the image above, it is now primarily in the form of a plaza on the townhome side, and a trail running around the outer perimeter of the property. A much thinner space along the railroad tracks replaces a slightly bigger one in the original plan. Leiderman also suggested that the townhome architecture proposed could have been more distinctive. Chair Charles Littlefield said he would like to have seen rooftop decks included on the MPDUs, just as they are on the market-rate townhomes.

But all seven commissioners commended the applicant after approving the project. Commissioner David Hill confessed he originally was skeptical of reducing density so close to Metro, but said the presentation had convinced him that this type of project could set Rockville apart from its high-rise-focused neighbors to the south. Leiderman said the project shows that there is a market in Rockville for both lower-density mixed-use projects, and for home ownership, as opposed to rentals. Even nearby residents were won over. The only member of the public to testify, a representative of the Cambridge Walk II townhomes, said his community was strongly in favor of the project.

The site was formerly home to Syms.
Posted by Robert Dyer at 8:00 AM