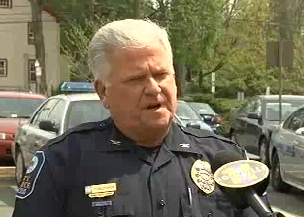 Rockville Police will soon be wearing body cameras, and that requires not only getting the technology and equipment in place, but also a policy to address privacy concerns such as how long footage will be stored. Chief Terry Treschuk told the Mayor and Council last night that he has been working on both aspects of the program.

Treschuk said one server will support and store video files from all of the cameras in use. He examined body camera footage storage policies from police departments across the country, as well as locally. Montgomery County, which already has begun using body cameras, has a 120-day storage policy. After study and consideration, Treschuk said he is recommending a 90-day storage time for the archiving of video taken by Rockville Police body cameras.

Councilmember Julie Palakovich Carr asked if citizens and the Mayor and Council will be kept apprised of the final policy, such as when body cameras will be on or off. Treschuk said he would ensure everyone is kept informed as the policy and cameras are implemented.

Photo courtesy City of Rockville
Posted by Robert Dyer at 10:00 AM