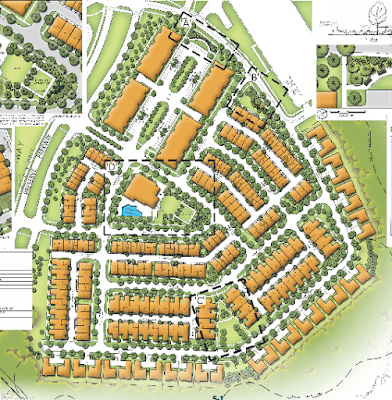 Montgomery County took one more slouch towards becoming the world's largest bedroom community last night, with the Rockville Planning Commission's recommendation to the Mayor and Council that land designated for office space in Tower Oaks be converted to residential. Commissioners voted 4-2 to approve developer EYA's project plan amendment that would allow 375 housing units, including four multifamily buildings, townhomes and single-family homes, on the east side of Preserve Parkway. The project plan will now go the Mayor and Council for approval. 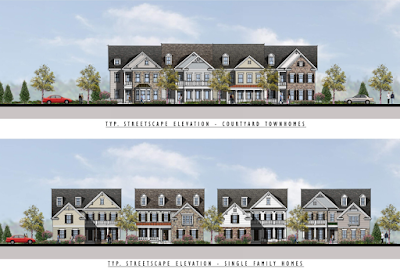 Staff presented the commission with 9 binding elements required for approval, and commissioners voted unanimously to add 2 more - a shuttle to take residents to Metro and nearby shopping centers, and to make a proposed market a binding agreement.

Aakash Thakkar, Senior VP of Acquisition and Development for EYA, described the market as being a "general store," where residents and their guests could purchase items like wine, cheese or a loaf of bread. Commissioner David Hill suggested making it a binding element, due to the absence of any grocery stores within easy walking distance of the site. EYA readily agreed to the addition, as well as the shuttle.

The project would wipe out two-thirds of the forested property, and preserve one-third. Thakkar said EYA plans to leave that forest in its natural state, and perhaps add a wood-chip path that would meander through it. He said EYA would be willing to sign an agreement that would ensure the remaining forest was never developed. The development will also include a clubhouse with swimming pool and patio, several pocket parks, and a nature trail with exercise circuit. 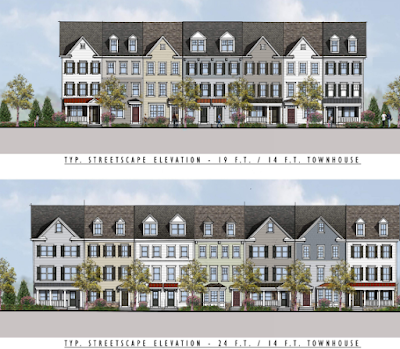 Commissioners expressed many misgivings about the proposal, but ultimately seemed to side with short-term real estate market realities over long-term ideals.

Thakkar said the development would target a similar demographic to that of the nearby Park Potomac, empty nesters. There would certainly be children, he said, but the lack of transit, dining and nightlife on-site would not appeal as much to millennials. He suggested that up to 20% of future residents might be current employees in the nearby office developments. The project was also supported by several adjacent office park owners.

Chair Charles Littlefield was among the most skeptical of the project, although he stressed that it had many strong points. "This is not smart growth," he concluded, based on the distance of the site from Metro and the proposed density. Thakkar noted that the density is lower than that of the developer's other projects, such as Park Potomac.

The trendy thinking in the County is that the office market is weak away from Metro, and will be in perpetuity. This is not accurate, however. Wheaton has a Metro station, and its office market is terrible. 4500 East-West Highway and 7550 Wisconsin, both a short walk from the Bethesda Metro, have had to lower expectations and lease to smaller tenants than expected. 4500 lost the bidding for Intelsat headquarters to Tysons.

How bad is it? One of the largest office buildings within walking distance of the Wheaton Metro station was just demolished to make way for - guess what? - housing.

In reality, the office market is weak because Montgomery County's private sector economy is moribund, and its business climate is one of the worst in the region. The County hasn't attracted a single major corporate headquarters in nearly two decades. Not a single County Council member was endorsed by any Chamber of Commerce in the County in the 2014 election, a damning indictment of the anti-business record of the Council.

As long as we continue to ignore that elephant in the room, we will never restore the office market. And you know what? Developers and landowners are largely fine with that. That's because the profits that can be realized from residential are far bigger than they will ever be from any office park or building.

So while there may be crocodile tears and renting of garments publicly over the weak office market, behind the scenes, developers are rubbing their hands together at the prospect of every office building and office park in Montgomery County being converted to residential.

Of course, that assumes that developers can continue to fill multifamily mid/high-rises with less-than-traditional suburban residents: heavily-subsidized millennials, contract and military housing, student housing, and the poor and homeless. That will not be so much the case in this Tower Oaks development, and several commissioners said they liked the home ownership and MPDU ownership opportunities the EYA project would provide.

But Littlefield was right on the money when he argued that "residential demand is not infinite." And equally so when he noted that "it's supposed to be the 'I-270 Tech Corridor,' not the I-270 residential corridor."

Whiile this project alone will not hurt much by itself, the flipping of office-to-residential is going to damage the City and County in the long-term. The loss of jobs and potential jobs, the incomes they provide compared to the retail/restaurant positions that replace them, and the impact on schools and roads are mounting by the day.

What happens if we one day have a pro-business County Council, and large corporate headquarters and government agencies like the FBI were being considered here? Where would they go? The land space would be gone.