Riemer a no-show at Council debate 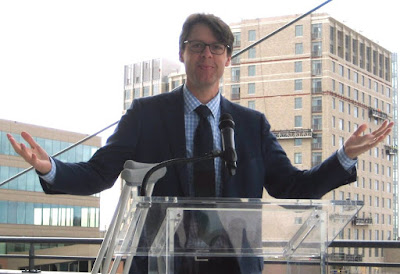 Coward of the County

Montgomery County Council President Hans Riemer continued a historic streak of not showing up for major candidate forums yesterday, when he blew off a morning debate sponsored by the Clarksburg Chamber of Commerce. A packed house of business owners turned out to hear from the candidates for Montgomery County Council At-Large. But Riemer was a no-show, leaving myself, Gabe Albornoz (D), Evan Glass (D) and Shelly Skolnick (R) to have a substantive discussion of the issues our business community faces in our moribund economy.

Riemer has not attended a general election debate since I destroyed him in a forum televised live by Montgomery Community Television/MyMCMedia in 2014. He did not show up to the next and final debate that year, which was hosted by the Greater Olney Civic Association. Riemer's action was a historic first in Montgomery County politics - the first time a sitting councilmember had skipped a formal general election debate hosted by a prominent community group. After Wednesday in Clarksburg, his record streak is now up to two.

No Council sessions were scheduled yesterday; in fact, the Council's lazy, endless summer doesn't end until next Tuesday, September 11. But you can understand why Riemer would be hiding. He has failed to deliver any of the priorities the residents and businesses in Clarksburg have sought. And Riemer vehemently opposes their top two priorities - building the M-83 Highway, and widening I-270.

Hans Riemer's failure to show up was an insult to the taxpayers who pay his $137,000 salary, and to the democratic process. Once again, Hans has demonstrated he doesn't care about his upcounty constituents.

But again, it's understandable Hans would be hiding - he has a lot to hide, with so many controversial questions about him still unanswered, and to be investigated by the press:


- Why does so much of his campaign cash come from outside the County, and largely from Wall Street crooks who caused the Great Recession, and their K Street lobbyists?

- Why has he accepted campaign checks from Mitt Romney's Bain Capital and Mitch Rales' Danaher Corporation, two pioneers in outsourcing American jobs overseas, while claiming to be a "progressive Democrat?"

- Why did he fail to disclose illegal activity in the County Department of Liquor Control he was aware of in October 2014 until after Election Day, when he was safely reelected, a violation of his oath of office?

- Why did he vote to create a $360,000,000 federal tax shelter for his sugar daddy Mitch Rales, after receiving at least $4000 in campaign contributions from Rales?

- Why has he repeatedly touted his role as "Obama's Youth Vote Director" in Barack Obama's 2008 victory, when a source from the Obama campaign has said Riemer was actually out of that position in the spring of 2008 - long before Mr. Obama had even clinched the nomination, much less his general election victory?

It's astonishing that Hans Riemer was able to win election, and serve two full terms, without any scrutiny by local media on these and other controversies. With at least two debates remaining, it's time for Hans Riemer to man-up and face the music on his scandals and utter failure in office. For now, he's earned his title as the "Coward of the County."