Sweetgreen is coming to Rockville

Federal Realty has signed another big name to its roster of restaurants at Pike & Rose. Fast casual salad concept Sweetgreen will open between Burger Fi and Sunday Morning Bakehouse on Grand Park Avenue. 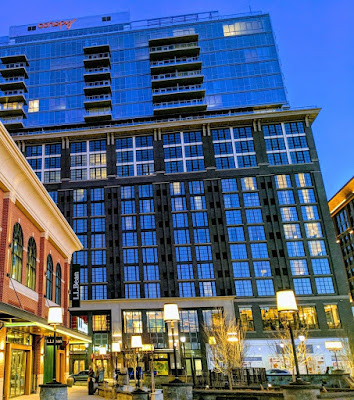 The restaurant will be in the ground floor of the Canopy by Hilton hotel/930 Rose condo building. Speaking of which, the Canopy hotel is really going full steam now. When I was at Pike & Rose this past weekend, cars unloading luggage at the front of the hotel were backing up down Rose Avenue toward Grand Park Avenue.
License plates included New York, New Jersey and Pennsylvania. And not necessarily the hip crowd the hotel is targeted toward, but families with kids, and the general tourist types. So it seems the hotel has become really popular since its opening in March. Canopy scores 4.5 out of 5 on TripAdvisor, 4.4 on Google Reviews, and I can't find a Yelp listing for it on Google.
Posted by Robert Dyer at 8:00 AM