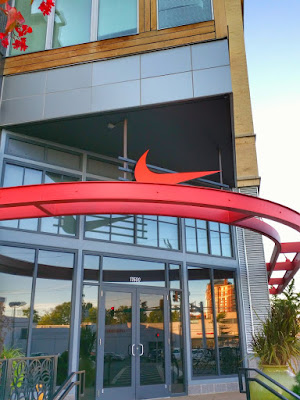 Federal Realty has found a winning tenant to take over the just-vacated Nike Factory Store space at Pike & Rose. Fogo de Chão Brazilian Steakhouse will open in the prominent corner at Old Georgetown Road and Grand Park Avenue in early 2019.

This lease really hits the target in two ways. First, it again bolsters Pike & Rose's status as arguably the top self-contained dining destination in Montgomery County, particularly once all of the pending new restaurants have opened by early next year. Second, Fogo de Chão is a brand well-known to the young, creative class professionals Federal Realty has sought to attract to the development. That demographic knows Fogo de Chão, because they are already dining at the other Fogo de Chão locations in the area.

For those not familiar with the chain, Fogo de Chão was founded in the great country of Brazil in 1979. Diners take an edible tour of the traditional churrasco roasted meats of Southern Brazil. Meats are sliced tableside by servers, but there are also many vegetable and fruit dishes to try. In fact, the company touts the health benefits of the Brazilian diet on its website.

Se Acostumando!
Posted by Robert Dyer at 8:00 AM