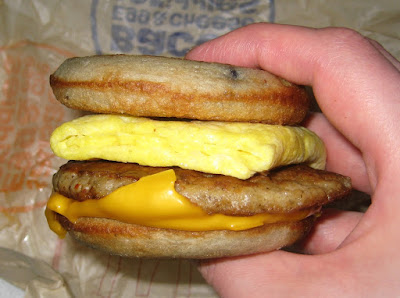 McDonald's is testing Blueberry McGriddles at select Washington, D.C. area locations, including some in Montgomery County. The new McGriddles have the same sausage or bacon, cheese and egg fillings found in the original McGriddle sandwiches, but swap the maple syrup-filled pancakes for blueberry pancakes.

This is a rare event, as the D.C./Maryland/Virginia area is rarely used as a test market for potential menu additions by fast food chains. McDonald's did test Mighty Wings at the former 4500 East-West Highway location in the 1990s. The chicken wings were introduced briefly nationwide almost twenty years later, in a fancier box than the plain white one the test wings came in.
Should Blueberry McGriddles be added to the permanent menu? Watch my review for my thoughts and a detailed look at the test item, which comes in sausage and bacon versions, and is only available during morning breakfast hours.