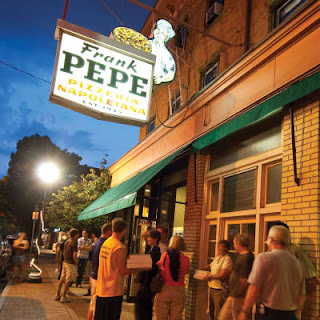 Coal-fired pizza appears to be the new trend in Montgomery County. Less than two weeks after the opening of Anthony's Coal-Fired Pizza in downtown Bethesda, Westfield has announced that the pizzeria touted as the "world's best" by many is coming to Montgomery Mall by the end of this year. Frank Pepe Pizzeria Napoletana will be located on Level 1 of the mall. The photo released by Westfield suggests the pizzeria will have an exterior storefront, which makes sense with the town center-style addition coming to the mall this decade.

Founded in 1925 in the beautiful town of New Haven, Connecticut, the pizza chain is still run today by Frank Pepe's descendants. Each location has a coal oven modeled after the original one Frank Pepe began using in 1929. All of their current pizzerias are in Connecticut, Massachusetts, Rhode Island and New York, so this will be the first Pepe's outside of that region.

Pepe's has won the Best Pizza title numerous times from media outlets and dining guides. YouTuber Tarnation Bob swears by the mushroom pizza at Frank Pepe's, and their White Clam Pizza is known as their signature menu item. Soon it will be our turn to sample what we've been told is the World's Best Pizza at Montgomery Mall, and we're likely to see lines such as those in the photo above.

Photo via Westfield Montgomery Mall
Posted by Robert Dyer at 9:21 AM