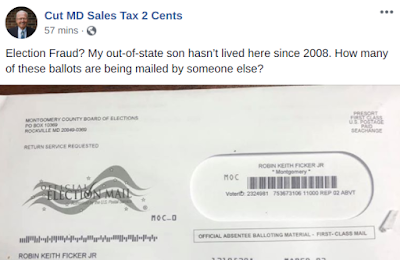 A few weeks after a man described how his deceased mother was shown to have voted in Montgomery County elections for a decade after her death, another case of an illegal ballot being issued has come to light. Attorney Robin Ficker, a Republican candidate for Maryland governor, reports that his son was mailed a ballot to his old Montgomery County address. Problem: Ficker's son hasn't lived in Montgomery County for 12 years. And as a "live" ballot, it could be illegally filled out and mailed back by someone else.

"Election fraud?" Ficker asked in a Facebook post showing the improperly-mailed ballot. "How many of these ballots are being mailed by someone else?" Ficker isn't the only one asking questions. A watchdog group has successfully sued to receive the voter registration information of all Montgomery County voters, after it found there are more names registered to vote than there are eligible voters in the county.

In 2018, anomalous voting results were seen at dozens of precincts across Montgomery County in the County Council At-Large race, if not others. The voter universe in that election also increased by about 100,000 voters in only four years since 2014. Local media outlets have not challenged County officials about either issue so far.

Leaving ineligible names on the voter rolls is a key source of voter fraud. Anyone who has the names of deceased or non-resident voters can walk into the appropriate polling place, claim to be that person and provide the few details asked for by judges, and cast a ballot illegally using one of those many names. In this year's by-mail elections, these illegal ballots will be mailed out and ripe for the picking by any organized voter fraud operation, further underlining the urgency in cleaning up Montgomery County's dirty voter rolls.
Posted by Robert Dyer at 8:00 AM