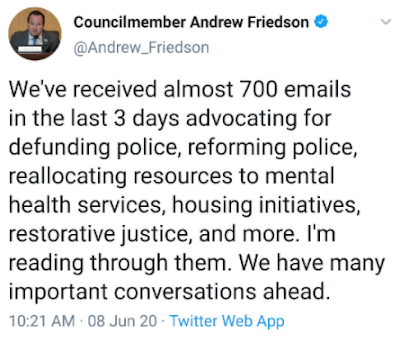 A day after the Minneapolis City Council vowed to dissolve its police department, the Montgomery County Council is now examining whether it should "defund the police." Councilmember Andrew Friedson (D - District 1) says the Council has received almost 700 emails from constituents "advocating for defunding police, reforming police, reallocating resources to mental health services, housing initiatives, restorative justice, and more." The Councilman said on Facebook that "[w]e have many important conversations ahead."

The all-Democrat Council has been mostly silent on the nationwide issues of dissolving the police or defunding the police to this point. Progressives in Minneapolis quickly turned against very progressive Mayor Jacob Frey, who has pressed through radical reforms like ending single-family-home neighborhood zoning, when he declined to support the City Council plan to abolish its police department Saturday. With Montgomery County and Maryland veering sharply left in the last decade, it will be interesting to see how the County Council addresses these issues with progressive voters, who are now the decisive factor in Democratic primaries.
Posted by Robert Dyer at 12:35 PM