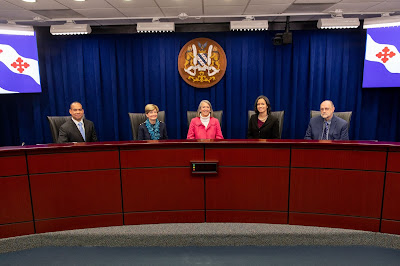 Rockville's Mayor and Council have sent a letter to the Maryland Department of Transportation asking that plans to add Express Lanes to Interstates 270 and 495 be halted temporarily. The plan was approved by the state's Board of Public Works in January.

“The City of Rockville requests that MDOT put a pause on the project and process,” the Mayor and City Council wrote. “It is not responsible to continue spending taxpayers’ money on preliminary design, environmental studies, and hiring a developer while the country is facing significant economic changes due to the COVID-19 pandemic. It is also predicted that teleworking will be more acceptable and widely implemented in the future, which will likely lower traffic volumes on I-495 and I-270. Therefore, it only makes sense to hold off on next steps for this project until a new purpose and need is defined.”

Rockville's elected officials would have a very strong argument about telecommuting - if our region's leaders had not decided to let a crisis go to waste.

Many expected the light traffic of the coronavirus lockdown could be a sign of the future of telework. After all, every employer across the region now has a firm list of exactly who can work from home. Common sense would dictate that all of those individuals should now be encouraged, if not ordered, to continue working from home permanently. Not only would we have cleaner air and very little traffic congestion, but perhaps necessary and expensive road expansions would no longer be needed.

Shockingly, regional officials have made clear they have no intention of seizing the opportunity to implement teleworking on a large scale. No formal efforts have been made to keep workers from returning to their commutes as the lockdowns are lifted.

Why is this? In short, developers, developers, developers. If the federal government were to continue teleworking on a large scale, Metro would have to shut down, as these heavily-subsidized riders are now the major bulk of the rail system's passengers. And transit use and traffic congestion are needed to continue to make the public relations case for increased density in development.

It's been a lost opportunity, but a small victory for those who have long pointed out that some in the development industry cynically use issues like climate change and pedestrian safety to wring out even more profits and buildable land for themselves. When the impact of Covid-19 revealed that more space would be needed for outdoor dining, developers moved quickly to ensure that would take the form of lane and road closures, rather than mandated wider setbacks for buildings from the street. Most recently and outrageously, developers are now using race to achieve their goal of mixed-use zoning in single-family-home neighborhoods - literally using racial tensions to line their own pockets.

In reality, those developers don't give a damn about any of these issues. The proof is in the pudding. When presented with a grand opportunity to extend the lockdown's clean air quality for our region by making mass teleworking permanent, they showed their true colors by sending the highway and transit users back to the office.

Email ThisBlogThis!Share to TwitterShare to FacebookShare to Pinterest
Labels: Mayor and Council, transportation