Berthiaume also provides a detailed analysis she says proves that keeping the city's strong Adequate Public Facilities Ordinance (APFO) in place - as the three candidates she endorsed have promised to do - will not prevent schools from being built in the future.

Recent attempts to weaken the APFO have been presented to suggest the ordinance was responsible for Montgomery County Public Schools not adding school facilities in Rockville. Berthiaume's provided evidence demonstrates that the APFO was not to blame in any of those instances. Rather, other issues at the county level interfered, Berthiaume writes.

Instead, Berthiaume argues strongly for keeping the APFO guidelines in place to prevent even more overcrowding in Rockville public schools. She says that Rockville Pike development will add
4-6000 new units alone. By 2016, Julius West Middle School will have more students than many small colleges, she notes.

"Do you want to see our sole middle school handling 1,800 or more students by 2020?," Berthiaume asks fellow voters in her letter.  "Please ask yourselves that question as you go in to vote [today]."

"It seems to me that one set of candidates [Team Rockville slate] favors essentially unlimited residential construction along 355, no matter the impact on our schools, while three excellent candidates will protect our Adequate Public Facilities Ordinance (APFO) standards," she writes.

"If you care about our children --or if you are just the sort of person who doesn't want to live in Crystal City - and never did - I ask you to please go out [today] and vote for Bridget Newton for Mayor, and Don Hadley and Claire Whitaker for Council." 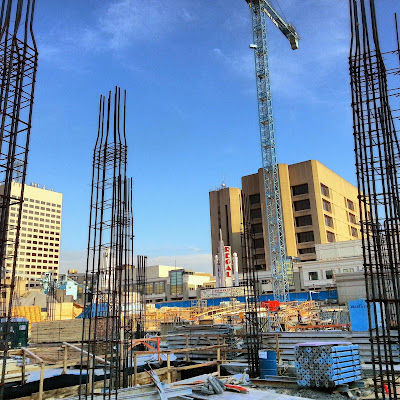