Jessica Reynolds, a member of the Rockville Historic District Commission, is speaking out on the recent 3-2 decision by the Mayor and Council to allow demolition of a historic bank building at 255 N. Washington Street.

In a letter published in this week's Gazette, Reynolds accused city leaders of preserving only those buildings with "architectural styles that meet their own tastes." The decision to not allow a historic designation process for the "Pink Bank" "has implications for how the public's voice will be heard in Rockville in the future," she wrote.

The building's distinctive design, Reynolds argued, not only serves as an important reminder of the city's blunder of demolishing its original, historic town center during the 60s, but also reinforces a sense of place in a time of what she has previously called "cookie cutter" buildings.

Reynolds predicted that the modern town center itself will be replaced again in only 30 years.

The HDC had recommended the city allow a historic designation process to begin for the structure. Supporters of demolition argued that historic designation had already been dismissed previously (however, according to preservationists, the building only recently has qualified by age for designation), and pointed to the developer's years of planning - and work with residents in the adjacent West End - as arguments for allowing the new development to proceed. Mayor Phyllis Marcuccio added that she strongly supported property rights by landowners in the city, and therefore was voting on principle to allow demolition. 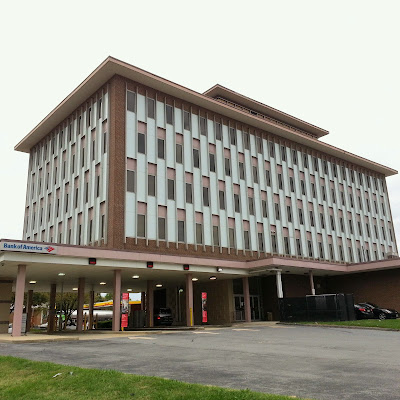