A site plan amendment for the Pike & Rose development, on the former Mid-Pike Plaza property along Rockville Pike in White Flint, will be taken up by the Montgomery County Planning Board on December 5.

The amendment would allow changes to be made to, and around, an existing retail building currently leased by Bank of America and Starbucks. That building is located at the southeast corner of the Pike and Rose development, where Old Georgetown Road meets Rockville Pike, and is referred to as "Building 13."

Changes described in the amendment include new building facades, a 1000 square foot expansion of retail space, a new pedestrian connection to Rockville Pike, and screening of existing trash receptacles and an electric transformer.

On the Pike side of the structure, the amendment would allow for outdoor cafe seating with overhead catenary lights, landscaping and a fountain. 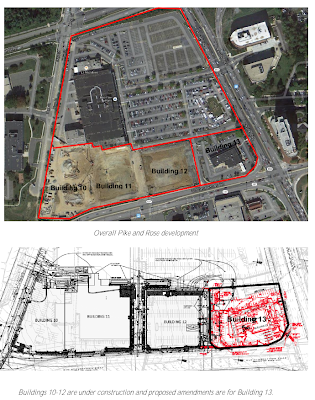