Mayor and Council on Chestnut Lodge: "We are starting the process over" 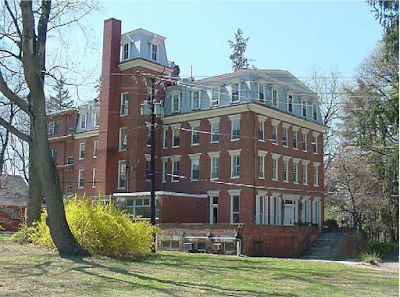 A discussion of how to proceed on a revised project plan submitted early this month for the Chestnut Lodge site ended with a new beginning last night. The Mayor and Council advised Rockville's zoning chief, Jim Wasilak, to essentially consider the revision as a new project being submitted. That was not the preference of developer JNP Chestnut Lodge, LLC, whose representative told the Mayor and Council that this was merely a minor revision that actually reduces the size of the project.

But the controversy over the plan is so great, and so many questions remain unanswered, that officials are seeking the maximum public input and discussion. The original Planned Residential Unit (PRU) agreement required a multi-family condo development, and a restoration of the historic Chestnut Lodge psychiatric facility main building. Despite the Lodge burning down in a suspicious fire in 2009, opponents of the new townhome proposal argue the PRU remains in effect, and requires the development to build a structure similar to the one lost. It also was predicated on the requirement for condos, as opposed to the more horizontal townhome design with only a handful of units.

Mayor Bridget Donnell Newton said she would like staff to explain how the existing PRU can be modified when the circumstances have changed. "I would like to see an explanation...how is this respective of the PRU that is on the property?" she asked. Councilmember Mark Pierzchala said he also has not received satisfactory answers to his questions regarding whether or not the proposed project meets the Secretary of the Interior requirements.

Councilmember Beryl Feinberg said she would like to have a public hearing. Pierzchala said his proposed process included one before the Mayor and Council, but that he didn't want to tell the Planning Commission how to conduct its process.

"We need to be very clear that we are starting the process over," Newton told staff. Wasilak said he would consider taking all of the steps proposed by the Mayor and Council - area meeting, mail notification to parties of interest, Historic District Commission review, Planning Commission review, and Mayor and Council public hearing and review - and add a staff review of the revised plan.

Pierzchala said it is important that the HDC know it has the authority to go beyond a courtesy review in this case, and give its opinions on the merits of the project, and its impact on the surrounding historic site and district. "I second it, and think it needs to come in the form of a memo from the HDC to the Mayor and Council," Newton said.

Wasilak promised to formally outline his plan for how to proceed by the end of the week.

Photo courtesy City of Rockville
Posted by Robert Dyer at 8:30 AM