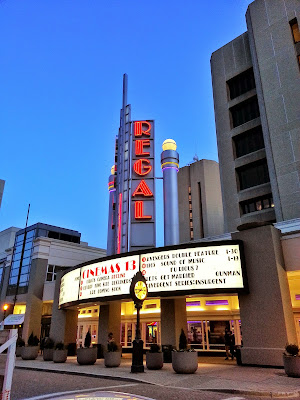 The Mayor and Council discussed solutions for the parking woes of merchants and patrons in Rockville's Town Center last night, as a follow-up to a February worksession on the topic. But the proposals outlined did not address the bane of most Town Center business owners - the competitive disadvantage of 24/7 paid parking in Rockville Town Square versus the free parking available at competing developments like Downtown Crown and Rio/Washingtonian Center.

Mayor Bridget Donnell Newton and councilmembers considered how to improve wayfinding signage, change City-controlled parking meter enforcement policies (such as using yellow cards for a 5-minute grace period), how sign ordinance limitations might prevent more effective parking signage, whether a consultant should be hired and at what cost, returning the popular Wednesday farmers market to Regal Row, restoring holiday banners to the Town Center area, and having regular consultation meetings with business owners and other stakeholders.

But, invited to the podium by Newton to share their initial reactions, several Town Center business owners said the discussion avoided the main issue - the cost of parking in the garages at Rockville Town Square.

"You don't understand how much we're suffering," said the owner of California Tortilla on E. Montgomery Avenue in Regal Row. "We're basically slaves now," to a parking situation that's deterring business, and the high rents they must pay, he said.

Mellow Mushroom owner Danny Trahan suggested the City save money on hiring a consultant, and listen to the business owners instead. Trahan estimated that the current paid parking situation is costing Rockville Town Square businesses $5 million in sales. By allowing free parking at least during strategic times like evenings and weekends, the increased revenue could refill City coffers and pay for free parking, Trahan argued.

Trahan said he is willing to put up money to help solve the problem, if selling advertising space in garages and in the public square would help offset the cost of free parking. He suggested building a dome structure in the square to allow activities to continue during inclement weather, as has been done in Reston Town Center. Advertising could be sold on the structure, as well as on signs in the garages, he said. Trahan said he would be willing to purchase signage in both locations to promote Mellow Mushroom.

Scott Feldman of Giuseppe's Pizza, where some patrons have stopped going because of parking costs and unfair meter ticketing policies, asked the Mayor and Council to compare the activity in Rockville Town Center on weekend nights to that in Downtown Crown and Rio. "You'll see a big difference," he promised. Many have cited the lack of wait times at Town Center restaurants on weekend nights, in comparison to hour-waits at Rio and Crown, as a metric showing how paid parking is killing business.

But landlords in the Town Center were not prepared to cut them a break at the February worksession. None attended last night's discussion. In February, several noted that there's no such thing as free parking. "If [merchants] want to have free parking, they can have free parking, It's just a matter of paying us," Duball, LLC president and principal Marc Dubick, developer of the Upton/Cambria Hotel and Suites building, said then.

Councilmember Julie Palakovich Carr made a very good point, that there are more garages than the ones in Rockville Town Square in Town Center, and that it would be difficult to have a free parking policy that covered all of them.

But the City is in a real parking pickle that could threaten the future of its Town Center, business owners said. Customer counts were down during the Duball construction, and now Hometown Holidays taste ticket redemption is dwindling in recent years, as well, the owner of Ben and Jerry's said. While the City can refuse to take action on the unpopular paid parking that gives Rockville a bad reputation in the region, he acknowledged, it risks finding many of its downtown shops "boarded up" if they go out of business as a result.
Posted by Robert Dyer at 8:00 AM