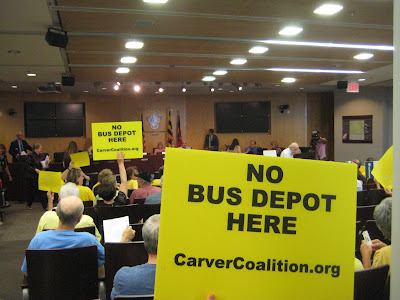 "Talked to death in Rockville" is a good summary of yesterday's Montgomery County Council worksession on the controversial attempts to relocate the Montgomery County Public Schools bus depot in Shady Grove. That site is supposed to be cleared by next year, so that a developer can build hundreds of townhomes and apartments there. By the end of the meeting, no votes were taken and no plan of action was determined.

While Council President Nancy Floreen did not allow a resolution to deny the Declaration of No Further Need for the Shady Grove site, by the end of the meeting she agreed to bring one forward, likely next week. The County Department of General Services was directed by Floreen to bring back a cost-benefits study for the scenario of simply leaving the depot where it is, and to provide a list of temporary and permanent sites where the buses could be moved.

But none of this officially rules out the use of Carver Educational Services Center, 1000 Westmore Avenue or the Blair Ewing Center on Avery Road, all of which have been rejected soundly by residents who would be impacted. Depending which councilmember you listen to, there are all kinds of potential outcomes, and all but one (keeping the depot at Shady Grove) would place a school bus depot in someone's neighborhood.

Only two councilmembers, Sid Katz (who represents Rockville) and Marc Elrich (an at-large member), explicitly said Carver, Westmore and Avery should be removed from the list of sites under consideration. Save Blair Ewing, a resident organization fighting a bus depot on that site, is now leading a letter/email-writing campaign to sway three more councilmembers to join Katz and Elrich in placing language eliminating those sites from the list.

So next week, the Council may unanimously vote to say that the Shady Grove depot is, in fact, still needed by the County. Does that kill the Carver/Westmore/Avery plans? Not unless that language is included in the resolution, and even then, the legal ramifications of leaving the buses in place after a developer has spent millions on its plans remain to be determined. The Council also assumes that County Executive Ike Leggett could indeed reopen talks with the developer to give the County more time to relocate the depot. There's no guarantee of that, either.

The Council did talk a lot, though. To their credit, at least a few councilmembers somewhat accepted the blame for their role in allowing this depot debacle to happen. Councilmembers George Leventhal, Roger Berliner, and Hans Riemer were particularly candid in acknowledging the Council blew it with the Shady Grove plan.

"In hindsight, that plan was unwise," Leventhal conceded to his constituents in the audience.

Interestingly, while many on the Council have vehemently argued that residential development will provide large amounts of tax revenue to the County, Leventhal and a few of his colleagues are now coming around to acknowledge what I've been saying for a decade - new residential growth does not pay for itself, and in fact, costs more in services than it brings in in new revenue. The County's structural budget deficit is proof of that.

Leventhal estimated the County has spent $407 million on the Shady Grove "Smart Growth Initiative" so far. When will that expenditure "pay for itself" as Leggett promised years ago, Leventhal asked David Dise, Director of DGS. He also suggested they add the cost of County services and schools to the cost-benefit analysis.

"If I'm in a hole, do I need to keep digging," asked Elrich of the Council's predicament. He too questioned if the potential revenue would cover the cost of relocating the depot, which he said may be "the best location we'll ever have" for it.

"We shouldn't be doing this," Elrich said. "I'm just not willing to do that to people." He counseled Dise to make sure that any site suggestion is accompanied with an explanation of how it would be "better than what you have now."

Councilmember Craig Rice, who represents the Upcounty area, misfired with the audience when he launched into a strident defense of the Shady Grove plan. He noted that some of his Clarksburg constituents live right next to a bus depot. Rice then attacked many of his own constituents, saying that "they want to keep those great things that we have in Montgomery County just to themselves."

That set off a round of booing and retorts from the audience. Floreen attempted to bring the meeting to order, as Rice hastened to add that he was not referring to the Carver Coaltion. Rice said he wants "to provide housing for everyone," although he didn't explain how that would be possible, or why it is the burden of County residents to accede to overpopulation of already-developed communities.

"What we really have here is a mess," observed Katz. "There is further need for [the Shady Grove depot]. There is no question. We need to do things in a more transparent way," he added to applause. A new depot "shouldn't be next to anybody's house," or route buses through residential streets, Katz said.

Katz argued that the City of Rockville "needs to be brought into the conversation." In explicitly calling for Carver, Westmore and Blair Ewing to be removed from consideration, Katz received another round of applause. "I usually don't get applause when I say, 'No,'" he joked. Summing up the situatiion, Katz concluded 'this does not make any sense. It doesn't make any common sense, and it doesn't make any dollars and sense."

Councilmember Nancy Navarro noted she was president of the Board of Education when the Shady Grove sector plan was passed. The plan "seemed to make a lot of sense back in the day," but not in 2016, she said. "It has not yielded the revenues promised by the County."

"I'm trying to understand where some votes are," Riemer began, speaking for many in the room. In any case, he said, he would vote against the Declaration of No Further Need the Council must pass to sell the land to the developer.

"It's not right to disadvantage current residents to clear a nuisance for future residents," Riemer said. "We played a role in this mess," he acknowledged. But at the same time, Riemer added that "I don't think we can just throw up our hands and walk away."

"We all bear some responsibility," Riemer went on, but promised that the Council has finally "taken ownership of the problem."

Councilmember Roger Berliner exhorted Floreen to allow a vote on the Declaration of No Further Need during yesterday's session, a request she failed to grant.

"The notion that this will be resolved by the end of the year seems pretty far-fetched," Berliner said. He congratulated the Council staff member who prepared the report for her prediction a decade ago that the Shady Grove plan would not pay for itself. "You were right," acknowledged Berliner, before asking Dise to provide "an honest assessment" of the situation.

Berliner commended Rockville Mayor Bridget Donnell Newton, who was in attendance, for her work on behalf of her constituents against the Rockville depot proposals. "You've served your community well," Berliner told her.

"I think the Carver people can go home happy," Floreen said at the end of the session, despite it having produced no concrete results. When Floreen asked Dise for a list of potential sites, she completely ignored the fact that Council staff had done just that in its report for yesterday's session. The County DGS itself has reviewed 200 properties. Let's face it, if there was a good site, the County would have acquired it long ago. 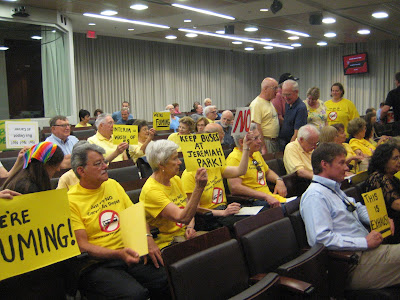 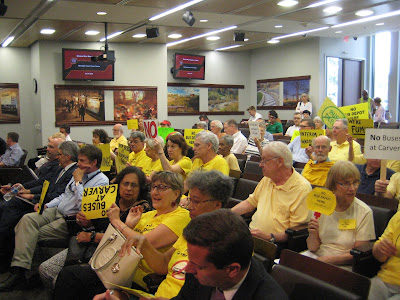 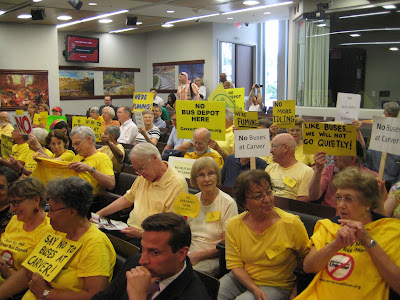