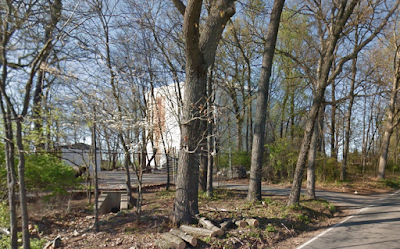 AT&T is proposing to build a temporary cell phone tower at 13890 Glen Mill Road, to provide 911 service to its customers while the City of Rockville rehabilitates its water tank at that site. During that work, the City will remove AT&T's existing tower from the tank. The work is scheduled to begin in early 2017, and AT&T plans to operate the temporary tower for 6-8 months, according to AT&T real estate manager Justin Barlow.
Barlow said only 5 residents attended a recent meeting the company held to inform the community around the tower site. Single-family homes are directly adjacent to the site. The temporary tower would be 99' tall. Adding additional telecommunications towers to the tank has been discussed by the Mayor and Council as a way to increase revenue.
Site plan renderings via City of Rockville
Posted by Robert Dyer at 8:00 AM

Email ThisBlogThis!Share to TwitterShare to FacebookShare to Pinterest
Labels: development