Rockville's Mayor and Council were briefed on the options for bus rapid transit service on Veirs Mill Road between Rockville and Wheaton at their meeting last night. The project options range from doing nothing, to a "Cadillac" option (Alternative 5B) that would give BRT dedicated lanes in the center of the state highway - but carry a price tag of $289.4 million. 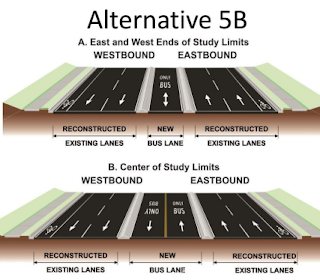 Councilmember Mark Pierzchala, a BRT supporter, was not convinced that option would be worth the money for the modest transit ridership boost the Maryland Department of Transportation claims the line will produce.

The loss of left-turns at many intersections was another concern for Pierzchala, as that would impact residents trying to get around their own neighborhood. Given the cost and disruption of the Cadillac option, Pierzchala said he is more comfortable supporting Alternative 3, which would provide dedicated curb lanes for BRT "where feasible."

Mayor Bridget Donnell Newton suggested that cutting corners with BRT would fail to produce world-class results for passengers, and for economic development. She warned against trying to "nickel and dime around the edges" of a major project. At the same time, Newton said she was very concerned about the impact on residents and homes along the route. Houses and businesses along Veirs Mill are threatened with demolition to various extents, depending upon which alternative is chosen.

Newton also urged that any extension to Montgomery College of the service reflect the actual hours classes are held on the Rockville campus.

MDOT is scheduled to make its final BRT recommendation by the end of this year.

Photos via MDOT
Posted by Robert Dyer at 8:00 AM