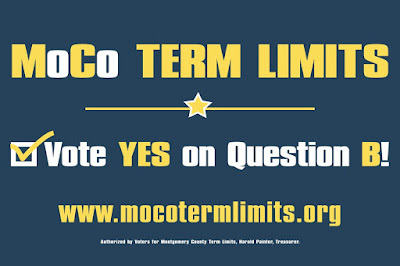 The Montgomery County Civic Federation, a non-partisan organization which officially represents over 100,000 County residents, has endorsed term limits ahead of a November 8 ballot question on the issue. MCCF passed a resolution Monday supporting a YES vote on Question B. This highly-respected group's support is perhaps the biggest vote of no-confidence in the Montgomery County political cartel since the County's chambers of commerce all declined to endorse any incumbent County Council member in 2014.

Question B, if approved, would limit County Councilmembers and the County Executive to a still-whopping 3 terms (12 years), effective immediately and retroactively.

The MCCF action, from an organization that factually contains vastly more Democrats than Republicans, further undercuts the ridiculous claims being made by some councilmembers who face ouster. Last Thursday, Councilmember Nancy Navarro hijacked a Council committee meeting on a collective bargaining issue to make a political speech. This was totally inappropriate, and ethically improper.

Navarro, who I have had a great deal of respect for in her work in the non-profit realm and on the Board of Education, has increasingly sounded paranoid about the term limits issue. She and her surrogates have claimed term limits are not the result of citizen rage about record tax hikes and communities being ignored in the development process in Westbard, Lyttonsville, Rockville (bus depot fights), etc. Instead, she claims they were proposed specifically to remove her from office.

But here's who Navarro says you, the average citizen, are, in her view:


"The leading proponents [of term limits] are right-wing, anti-immigrant extremists. They don’t care about you, or me.”

Whoa. That's crazy talk, folks. That's an outrageous smear and accusation, with no basis in fact. It's this self-serving, out-of-touch, and - frankly - nasty attitude that is likely to seal the deal for term limits passing November 8.
Posted by Robert Dyer at 8:17 AM