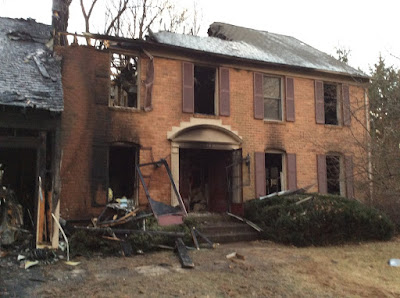 Montgomery County Fire and Rescue personnel responded to a fire in the 1700 block of Pasture Brook Way in Rockville around 9:45 last night. They found a 3-story home ablaze in heavy fire. The initial investigation suggests the cause was ashes that had been disposed of in the garage, according to MCFRS spokesperson Pete Piringer. Fire spread from the garage to the rest of the home, he said.

Over 75 firefighters were needed to extinguish the heavy flames. Neighbors called 911 to report the fire, Piringer said. Damage is estimated at over $600,000, and two adult residents have been displaced.

Piringer stressed the importance of properly disposing of fireplace ashes. Place them in a metal container with a lid, and never in a cardboard box, plastic trash can or bag. Once filled, place the container outside away from your house, or any combustible material. Never place ashes in the garage.

Photo: Pete Piringer/MCFRS
Posted by Robert Dyer at 9:07 AM