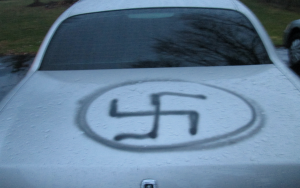 Vandals have attacked another home of a supporter of President-Elect Donald Trump in Montgomery County. This time, a family of Trump supporters in Burtonsville was targeted.

Montgomery County police officers responded to a home in the 3000 block of Spencerville Road in Burtonsville yesterday morning, November 30, around 6:25 AM. They found that swastikas, and the words, "Trump" and "racist," had been spray-painted on all 3 cars in the home's driveway.

Police say the victims were known publicly to be Trump supporters, and believe that was the motivation for the attack. They are now investigating the incident as a "bias-based" crime of vandalism. 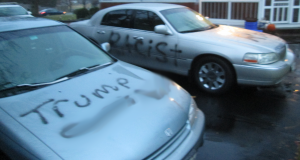 Anyone with information about this vandalism is asked to contact the 3rd District Investigative Section at 240-773-6870.  For those who wish to remain anonymous, Crime Solvers of Montgomery County is offering a reward of up to $10,000 for any information that leads to the arrest of the suspect(s).  Tipsters can call Crime Solvers of Montgomery County toll-free at 1-866-411-TIPS (8477).