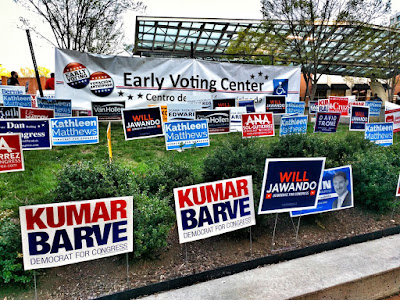 Judicial Watch, a non-partisan foundation promoting integrity and transparency in government, is threatening to sue Maryland in federal court over what it calls Montgomery County's "dirty election rolls." The foundation's analysis revealed that there are more people registered to vote in Montgomery County than there are citizens of legal voting age, based upon the latest U.S. Census data. Judicial Watch says the excess voter names are of those who have died or moved, or of non-citizens who have illegally-registered to vote.

Voter fraud can often involve people impersonating voters known to be deceased, or to have moved away, at polling places. In Montgomery County, only the most basic personal information (name, address, date of birth) about a deceased or absent voter would need to be known to vote using their name at the polls. Maryland U.S. Senator Ben Cardin (D) warned last year that "We've seen fraud committed in our state in prior elections." Cardin and Maryland Attorney General Brian Frosh (D) implored voters to "let us know" if they "encounter fraud or misconduct" at polling places.

Maintaining up-to-date voter rolls is required of states under federal law. Judicial Watch is demanding Maryland force Montgomery County to remove all ineligible voters from its rolls in 90 days, or they will sue the state - and ten others - for violating Section 8 of the National Voter Registration Act.

“Dirty election rolls can mean dirty elections,” Judicial Watch President Tom Fitton said in a statement. “These 11 states face possible Judicial Watch lawsuits, unless they follow the law and take reasonable steps to clean up their voting rolls of dead, moved, and non-citizen voters.”
Posted by Robert Dyer at 8:58 AM