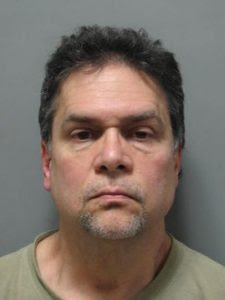 Montgomery County Public Schools superintendent Jack Smith's apparent giddiness over the shocking decision to drop charges against the two students accused in the alleged Rockville High School gang rape was short-lived, to say the least. Remember the Richard Montgomery High School "security team leader" MCPS didn't run a background check on before hiring him - and who was then arrested for allegedly having sex with a 17-year-old female RMHS student? After being bailed out of jail quickly, Montgomery County police say he did it again.

Mark Christopher Yantsos was arrested Friday after a County judge revoked his bond. Police allege Yantsos defied orders to stay away from the student. Instead, they allege, he met with her several times since he was charged, and had sex with her once again.

Yantsos made headlines after it was revealed MCPS had hired him without doing a background check, which was proven by the fact that his previous run-in with the law - brandishing a revolver toward a woman he was trying to pick up at a topless bar - is easily called up in a simple Google search. Yet he was hired by MCPS to run security at Richard Montgomery. You can't make this stuff up, folks.
Posted by Robert Dyer at 10:59 AM