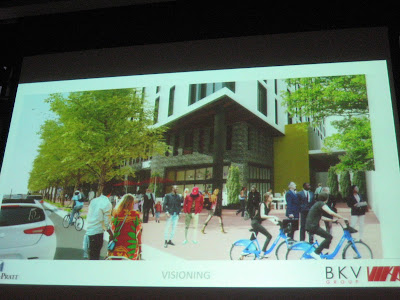 Developer Foulger-Pratt unveiled its plans for a mixed-use development at 220 E. Middle Lane at a public meeting last night at Rockville Town Square. An 85', 230000 SF mixed-use building will include 240 rental apartments, and about 8000 SF of ground floor retail. BKV Group is the architectural design firm for the project, which will sit between Federal Realty's Rockville Town Square and Foulger-Pratt's two Class-A office buildings, Rockville Metro Plaza and Rockville Metro II, on what is currently a surface parking lot.

Foulger-Pratt Senior Vice-President Dick Knapp said the project is designed to "fill the gap" between the Rockville Metro station and Rockville Town Square. Ground-level retail, landscaping and amenities will be utilized to activate what is currently a dead stretch of E. Middle Lane. "To the extent E. Middle Lane is activated," Knapp argued, "it's going to make that connection between the Metro and Town Center that much better."
Knapp said the theme of filling the gap expanded, after the company met with Rockville Mayor Bridget Donnell Newton, and City Councilmembers Julie Palakovich Carr and Mark Pierzchala.

"We got a lot of excellent feedback from those three," Knapp said of those elected officials. In direct response to their input, he said, new elements were added to the project that fill needs for the city. Knapp said that Foulger-Pratt has agreed to Newton's request for family-size, 3-bedroom units. As a result, 11% of the MPDUs in the building will be 3-bedroom units, a longtime housing priority for the mayor.

Those 3-bedroom MPDUs will rent for only $1400-a-month, Knapp said. 1-bedroom MPDUs will run as low as $1000, and 2-bedrooms for $1335-a-month. He predicted market-rate units in the building would be similar to The Upton across the street. Studios would likely start at $1500-a-month, 2-bedrooms at $2300, and 2-bedrooms with dens at $2500.
The building construction will be wood-frame atop a concrete base, with 6 levels of residential over parking and retail. In order to preserve access to the existing parking for both The Palladian and the Foulger-Pratt office buildings, as well as to the existing loading docks, a sizable garage entrance will be located on E. Middle Lane. On the right side of the building, an "urban grotto" will provide pedestrian access to the office buildings and parking.

In the garage entrance on the left side near HSBC Bank, there will be a Capital Bikeshare station, a map of parks and trails in the city, and a bike repair station with tools and an air pump. Knapp credited Palakovich Carr and Pierzchala, both cycling advocates, for suggesting those amenities. Out front, there will be cafe seating potential, if a restaurant tenant ends up leasing space there. The building will wrap around a central courtyard, which will feature a pool. Environmental features will include a green roof, a green panel along the building's frontage, and a bio-retention facility.

As Phase 3 of Foulger-Pratt's development of this site, the project has existing approvals from the City of Rockville. But that approval was for a 100' office building, not residential. The applicant will have to file, and get approval for, a project plan amendment to make the change. Barbara Sears, the applicant's attorney, said the project already complies with the city's Adequate Public Facilities Ordinance. Bill Robinson, a civil engineer with VIKA working on the project, said the team believes the existing water main at E. Middle Lane and Monroe Street - which flows south toward City and Montgomery County government buildings - is adequate for the new sewer demands this project will represent. If during the process they find otherwise, they will be prepared to address that, he said. 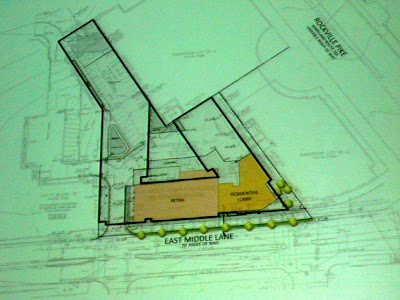 Sears said school capacity is "adequate under the test" now applied under the city's updated APFS. Students living in the new building would attend Beall Elementary, Julius West Middle School and Richard Montgomery High School.  The target demographic for the project includes "singles and couples in the technology field," and empty nesters, Knapp said. Foulger-Pratt anticipates both groups will find the "lock-and-leave" services the company will provide as the property manager appealing. He said the company plans to hold on to the property for the long-term.

Both Sears and Knapp suggested traffic would be lighter under the residential use than the original office proposal. There will be 1.2 parking spaces per unit, Knapp said, as well as capacity in nearby garages. He noted that hundreds of spaces were available in the adjacent Maryland Avenue garage at Rockville Town Square, when he pulled in last night. "We're going to provide plenty of parking, I assure you."

Montgomery County's moribund private sector economy continues to drag down demand for office space. No major corporation has relocated to the County in two decades. Foulger-Pratt's Phase 3 office project seems to be the latest victim. County officials eager to get rid of office parks favored by biotech and defense firms have tried to spin the office vacancy crisis, arguing that only office space near Metro is viable.

Foulger-Pratt's real-life experience suggests otherwise. The company tried to attract an anchor tenant for the third office building, steps away from Metro, Knapp recounted, but there were no takers. He said demand is hurt further by the large number of vacancies south of Rockville, in places like White Flint and downtown Bethesda. "Bethesda has a lot of vacancies," Knapp said. Rather than continue to sit on the property, he said, the company decided to switch gears and develop as residential. Duball, LLC has its own residential project that will be directly across the street. Knapp announced that construction on that project should begin next summer.

Construction was on the minds of nearby residents who attended the meeting. Noise and dust were immediate concerns for residents of The Palladian at Rockville Town Square, which is directly adjacent to the Foulger-Pratt site. One resident of that building was concerned that the E. Middle Lane access for Palladian residents to Garage B would be cut off when Maryland Avenue closes for events. A representative of the architecture firm said the design will maintain that vehicle access. He said they are working closely with Federal Realty on that issue, as well as on making the side of the building that will be seen by Town Square patrons walking between the development and the garages, appealing. Residents of the new building will have elevator access from that side. "We are looking closely at that design. It's a challenge."
Town center residents also expressed strong opinions on current retail, and potential tenants for the new building. Knapp said project planners were making locally-owned retail and restaurant tenants a priority, but some residents dissatisfied with limited options said they would welcome a chain grocery store or market. "This place is so dead," said a resident of the town center. Dawson's Market is too small and specialized, she said, and the closest full-size grocery store is "the most pathetic Giant I've ever been to." The resident said she had moved north from White Flint, and noticed the difference in retail options. "I miss Harris Teeter," she said.
The resident suggested a more mainstream grocery market as the tenant for the 8000 SF of retail space in the new building, far less than typical grocery stores require. "It's one thing to make money," she said. "It's another thing to say, 'Here's some trees, here's a place to sit, and here's a market.'"  Knapp said the technical term for what she wanted was "small format grocer." He assured the woman her market suggestion "will be in the minutes" of the meeting. Another resident disagreed with having a chain, saying he preferred Foulger-Pratt's original concept of attracting local tenants. 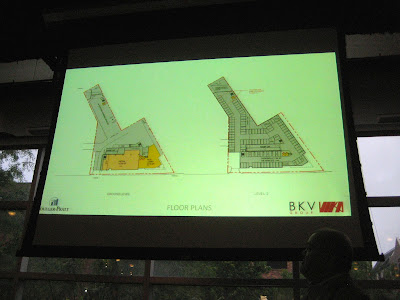 A resident who lives across E. Middle Lane from Rockville Town Square lamented the vacancies in that development. He suggested that adding residents from the new building to the area would help. "We need more residents here...who can shop here," he said. Knapp agreed. "Town Center needs support."

That support is still nearly five years away, however. "It's going to take awhile," Knapp acknowledged of the timetable. He said groundbreaking is two years away, and that it will take about two years to construct the building. Sears predicted the project's Pre-Application Submittal would likely be filed "toward the end of the month." Next up, will be informal presentations to the Planning Commission and Mayor and Council, followed by the formal approval process and public hearings before both bodies.

With the announcement of a Japanese steakhouse as the future ground-floor tenant at Rockville Metro II next door, the entire block between MD 355 and Maryland Avenue could be fully-activated at street level by 2021 or 2022. 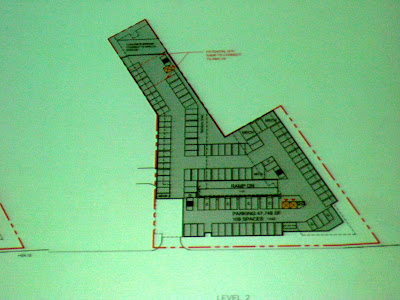 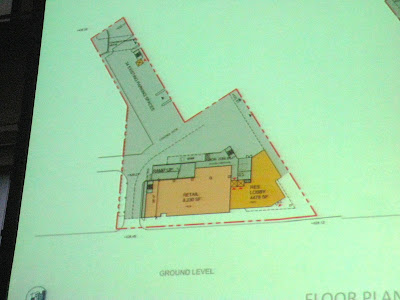 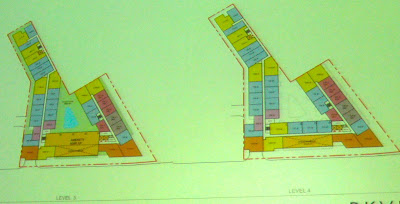 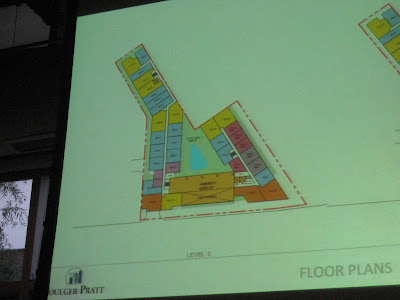 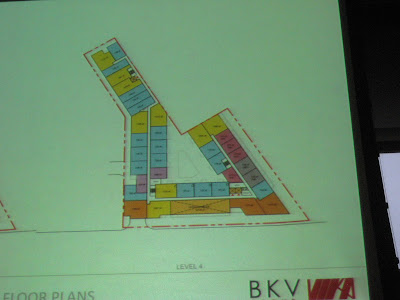 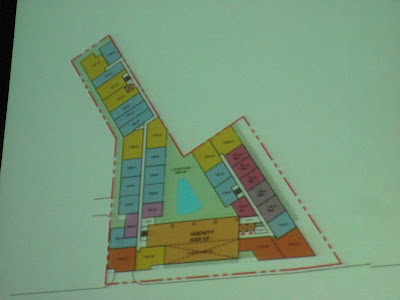 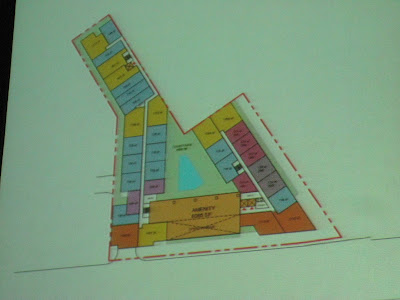 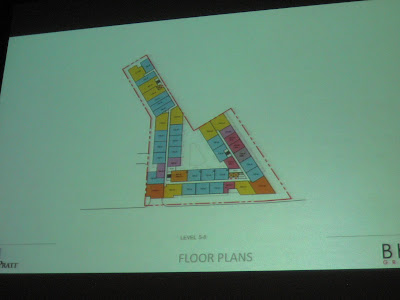 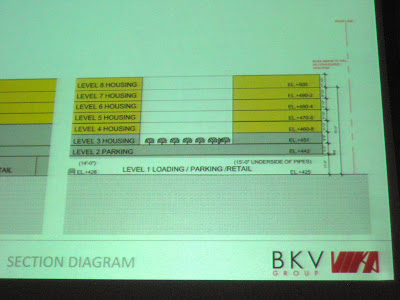 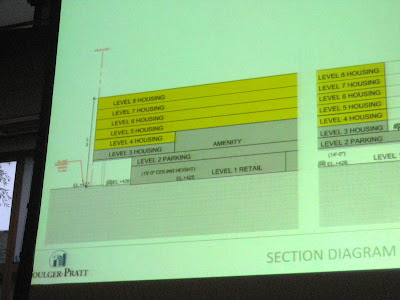