MoCo Council to take another stab at criminalizing the homeless 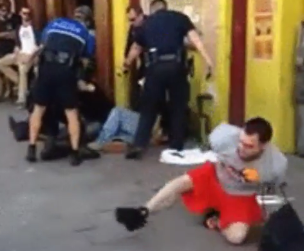 The Montgomery County Council building is just overflowing with Christmas spirit, as the Council is taking the initial steps before the holiday break to criminalize the homeless. This isn't the first time, as the Council tried this previously in their last term, but ran into controversy, including a report from a national organization that condemned the effort.

With Council Bill 39-17, they will again attempt to ban panhandling in the County. The Council memorably claimed last time that the majority of those who panhandle are not actually homeless, but "professional panhandlers" who drive into the County each morning from out-of-state. That's probably news to the folks in downtown Bethesda and Silver Spring whose main wheels are shopping carts filled with everything they own.

What's driving the Council's mania to criminalize the homeless? Well, it may just have something to do with politics and the election year ahead. Councilmember George Leventhal has given himself loud credit for supposedly finding homes for every single homeless veteran in Montgomery County. The local media hasn't bothered to fact check Leventhal on that claim, and simply print it as fact. In reality, it's almost impossible to verify such a boast, which is probably why Leventhal is making it.

Now Leventhal has promised to house every single homeless person in the County by December 2018. Conveniently, that will be a month after the election, in which Leventhal is running for County Executive. Wouldn't it also be convenient to use a panhandling ban to clear the homeless from their most-visible perches on County roads, to make it appear as if they aren't there?

They've just banned circus animals, now the homeless...think they'll get around to dealing with that $120,000,000 budget shortfall anytime soon?
Posted by Robert Dyer at 8:00 AM