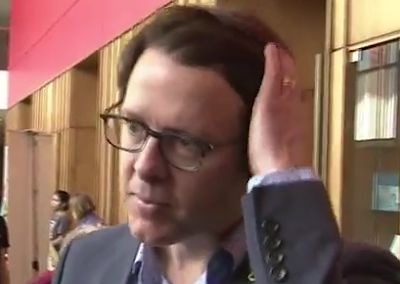 A backroom political deal culminated Tuesday with a unanimous vote by the Montgomery County Council naming Councilmember Hans Riemer Council President for the final year of their current term. In a rambling seven minute speech, Riemer took aim at the County's established suburban neighborhoods of "cul-de-sacs," which he described as "appealing, if exclusive, suburban communit[ies]" that are home to "those who already have every advantage."

Delivered with a sneering tone and slight smirk, Riemer's remarks echoed those of his colleague George Leventhal a few years ago. Leventhal declared the suburbs "a mistake," and during the Westbard sector plan battle, told residents angry about the plan to urbanize their neighborhood they should just be glad they were "lucky" enough to live there.

"People used to come here to get away from the city," Riemer said Tuesday, announcing a new "metropolitan" identity for a County where a majority live in leafy, suburban neighborhoods. Riemer appeared delusional when referring to the visceral anger displayed by residents toward the Council in the last several years - a backlash that culminated in the passage of term limits by an overwhelming margin in November 2016. Despite having his own term limited by that vote, in Riemer's world, "emotions in our community are charged" because of Donald Trump, not his own votes for tax hikes and urbanization of existing rural and suburban neighborhoods.

Riemer's Trump-like reputation for falsehoods was on full display in yesterday's speech. Moments before casting a vote to pass the controversial Westbard sector plan in 2016, Riemer claimed the Westbard community was "a mile from two Metros." That was a four-Pinocchio whopper, given that Westbard is at least two miles from any Metro station, nowhere near the quarter-to-half mile distance universally agreed upon for "transit-oriented development."

On Tuesday, Riemer stated that the Purple Line would place the University of Maryland "minutes away" from Montgomery County residents. In reality, the light rail's average speed between Bethesda and College Park will be less than 19 MPH. He came up with a new definition for the County's longstanding achievement gap between white and Asian students, and their black and Latino peers. Stunning observers active on education issues, Riemer falsely described Montgomery County Public Schools' gap as only affecting those between the ages of "zero and five." A clever scheme to absolve failed County officials from any blame, but unfortunately, completely false.

Riemer was more honest about the County's hated government-controlled liquor monopoly, which he took steps to strengthen and preserve during his current term. "We may have a reputation for liquor control," Riemer acknowledged. That control has frustrated restaurant and bar owners, who are forced to pay higher prices while getting poor selection and service from the County. Meanwhile, residents are among the few in America who cannot purchase beer and wine from grocery, drug and chain convenience stores.

Riemer's disdain for his suburban constituents, who represent a majority of County residents, raises questions as to how he intends to get anything done this year. It also brought to mind a quote from chef Anthony Bourdain:

"He’s a classic example of the smirking, contemptuous, privileged guy who lives in a bubble. And he is in no way looking to reach outside, or even look outside, of that bubble, in an empathetic way.”
Posted by Robert Dyer at 8:45 AM