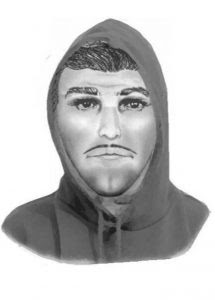 A 27-year-old woman told police she was surprised by a hoodie-wearing Latino man as she entered her home. The man allegedly raped her inside the home, and then fled on foot.

Detectives say the man's hoodie was black with a white fleece lining. He was also wearing dark jeans, and had a thin mustache. The suspect was approximately 5'9", and police have released a composite image of the alleged rapist.

Detectives are asking anyone who recognizes the suspect or who may have information about this rape to call the Special Victims Investigations Division at 240-773-5050.  Those who wish to remain anonymous may call Crime Solvers of Montgomery County toll-free at 1-866-411-TIPS (8477). Crime Solvers will pay a cash reward of up to $10,000 for information provided to their line that leads to an arrest and/or indictment for this crime.
Posted by Robert Dyer at 8:30 AM