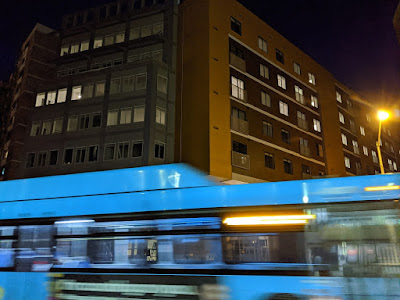 A remarkable column about Montgomery County transit appeared in Friday's Washington Post. It was remarkable for two reasons. First, Post columnists have been silent on transit cuts made by the Montgomery County Council over the last decade, including their elimination of the Park and Ride route for Frederick commuters entering Montgomery, and their slashing of weekend bus service in Damascus. And remarkable because it was...false.

Columnist Petula Dvorak was apparently attempting to write a critical piece about service cuts proposed by the Maryland Transit Administration to MTA bus routes and MARC rail service. But a lengthy introduction, and let's-give-the-Council-free-press quotes from councilmembers, suggest that Montgomery County and its Ride On bus service will be the victims of the MTA cuts.

Ride On Route 55 is specifically cited by Dvorak, and later she says the MTA cuts will make the Route 55 buses even more crowded like "sardine cans." She adds that low-income residents in Montgomery County will be "among those devastated by reductions in bus routes." The article paints Maryland Gov. Larry Hogan (R) as the villain who is behind the cuts.

The column wound up literally being fake news. At best, Capitol Hill resident Dvorak did not realize the MTA doesn't run all bus service in the state of Maryland.

Depicting Montgomery County Council members as heroes fighting to save Ride On bus service in the County doesn't even pass the laugh test, much less a fact check. If they are working so hard to save transit, why have they still not restored weekend service on Route 90 in Damascus, a 2010 Ride On cut that left car-free residents stranded in town on weekends?

Email ThisBlogThis!Share to TwitterShare to FacebookShare to Pinterest
Labels: politics, Ride On, transportation