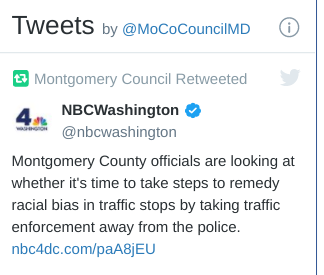 Proposal is illegal under
federal and state law

The Montgomery County Council is proposing to create its own police force, to replace the Montgomery County Police Department's role in traffic enforcement. This would be illegal under both federal and Maryland law, but that's not deterring them from trying to quietly move forward. Councilmembers have floated the idea with two local reporters in recent weeks, resulting in two low-key articles, one in The Washington Post and one on NBC Washington's website. Those, and a virtual town hall being held by one councilmember tonight, have largely evaded public attention.

Who would make up this new police force remains unclear. The Post article made vague references to "civilians" somehow gaining the authority to pull over and detain motorists. NBC Washington reports that it could be County bureaucratic employees who somehow gain this authority. Unfortunately for the Council, neither group can engage in such activity under the law. Which is why such a ridiculous idea isn't currently allowed anywhere in America.

In the case of civilians, the Council may have been inspired by an idea proposed in the District to have civilians be able to use an app to enforce traffic laws in Washington, D.C. One can only imagine the potential abuses of an army of "Karens" wielding a Stasi-style reporting app, but that was largely the goal, as yet another way to harass people committing the horrific offense of continuing to drive private automobiles.

Now, imagine Karen or a random bureaucrat empowered to pull you over and issue tickets and other penalties, with no way to defend yourself against any preposterous allegation designed to fill the County's dwindling coffers. Your crime might be your race, as if racism is somehow only found among sworn police officers, or a particular religious or political bumper sticker displayed on your vehicle. Let's not forget, it was our white County Planning Board chair who repeatedly called in police officers on members of a black church peacefully protesting at board meetings.

Having non-sworn civilians pulling people over in traffic would not only be a violation of federal and Maryland law, but it would also be a danger to those making the traffic stops. Who would pull over for a non-police vehicle, especially when a non-sworn bureaucrat would have no authority to make a stop? What happens if the driver detained is a criminal and has a violent response? How would tourists know non-police could pull them over in our jurisdiction? How many accidents will be caused by the confusion of non-police vehicles trying to pull over drivers on busy roads? And traffic stops are inherently very dangerous to make, as the number of police officers hit by vehicles while making such stops each year indicates.

Montgomery County has one of the most professional and highly-trained police forces in the nation. These men and women are prepared physically and mentally for one of the most difficult and demanding jobs in the world. Bureaucrats would not have anywhere close to the same preparation and judgement as these officers possess. And if they did, why and how would taxpayers fund what essentially would be a duplicative police academy and police department?

The bottom line is that what the Council is proposing is illegal. They've offered no details on their proposal, nothing is mentioned about it on the Council website, and there is so far no public process through which we the People can yet comment on this.

If you are concerned about your Constitutional rights and tax dollars, you may want to sign up for Councilmember Will Jawando's little-advertised "virtual town hall" tonight at 7:00 PM. Given the hush-hush nature of the event beyond the Montgomery County political cartel, it's unlikely he's expecting your virtual attendance. 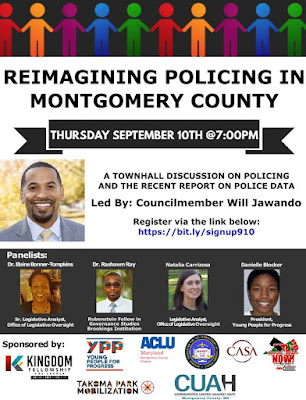 Would you turn to your lawyer or hairdresser to perform emergency heart surgery? Likewise, most of the general public is more comfortable with professional police officers enforcing the law than with random bureaucrats. It's about time we also had a professional County Council. Maoist fever dreams like a personal police force are yet another distraction from the Council's failure to address the multiple crises they've created over the last two decades.
Posted by Robert Dyer at 8:00 AM