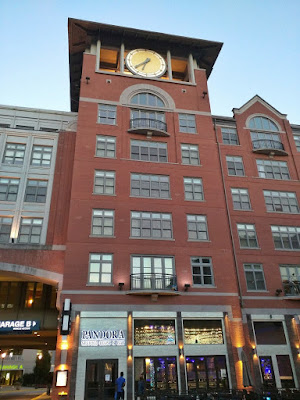 The Starbucks of half smokes is coming to Rockville Town Square. HalfSmoke founder Andre McCain has leased space at the struggling development at 36-A Maryland Avenue, formerly home to American Tap Room and Pandora Seafood. McCain opened the original HalfSmoke at 651 Florida Avenue N.W. in the District.

HalfSmoke's menu will feature four kinds of sausage, as well as grilled chicken and falafel. Another specialty of HalfSmoke is adult milkshakes, although non-alcoholic shakes are available, too.

McCain told QSR Magazine in 2017 that he is trying to put an upscale spin on what is considered wrongly to be a cheap product. Part of that is in providing high-quality ingredients. But the other part is providing a Starbucks type of atmosphere where customers are encouraged to linger at the restaurant in comfortable seating, rather than run out the door gobbling a half smoke.

It's a tough time to be launching a restaurant empire, to be sure. HalfSmoke is also expanding to Baltimore. I love hot dogs, so it won't be a tough sell to get me in the door.