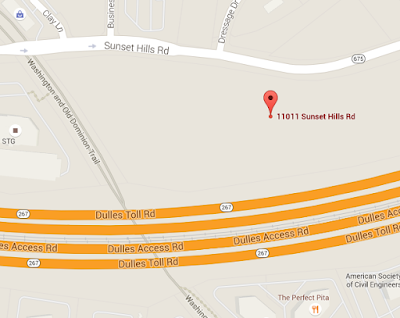 The first weeks of 2016 in Montgomery County have been dominated with promises of new tax hikes and perpetuation of the County's liquor monopoly by elected officials, exaggerated claims of miracle solutions to homelessness, and the discovery that yes, your kids in Montgomery County Public Schools are still being zapped by radioactive gas over the EPA limit - and that County officials hid this from you for some time. But across the river in rival Fairfax County, they've spent the month doing what they do best - cleaning MoCo's clock in economic development.

The first big win by a regional jurisdiction this year is the winner of the competition for the next General Dynamics headquarters - Fairfax County.

A search that considered hundreds of sites around our region and the nation ended at a piece of property at 11011 Sunset Hills Road in Reston. Right off the Dulles Toll Road.

No public effort was made by Montgomery County to win over General Dynamics. Neither the County Executive, nor the County Council, made any public overtures to General Dynamics. That, and offering incentives, are about the only tools Montgomery County could employ, considering that officials are still refusing to build the long-delayed Potomac River crossing west of the American Legion Bridge.

Without direct access to Dulles Airport, and with a severely-unfriendly business climate, it's difficult to appeal to a major defense contractor like General Dynamics.


Loren Thompson, a defense consultant, said it was no surprise that the company decided to stay in Northern Virginia, close to the Pentagon and Washington Dulles International Airport.

“I think the business climate in Northern Virginia is generally more favorable to corporate headquarters than the District or Maryland...if you’ve followed GD over the years, you know the financial implications would have been paramount in their decision of when to move and where to move.”

GenDyn is the third-largest Pentagon contractor, and will bring 200 high-wage jobs to this corporate headquarters, with two future 30,000 SF additions planned for more jobs.

The headquarters could easily have been accommodated by any of several supposedly-struggling and vacant office parks in Montgomery County. Many of these are currently being put to such sexy uses as cookie-cutter townhomes and self-storage facilities, as Montgomery County has failed to attract a single major corporate headquarters in over a decade.

GenDyn's plans also completely contradict the talking points given by the Montgomery County political cartel, who have told us that corporate tenants are all downsizing, and have no interest in suburban campuses (never mind that the top companies in the world like Facebook, Google and Apple all operate out of suburban campuses).

Oops. General Dynamics is increasing its square footage from 175,000 SF in its current headquarters, to 250,000 SF when its new headquarters is completely built out, according to current plans. Its choice was - a suburban office park, which at over a mile from the nearest Metro station, won't get many millennials to walk to work. But count on those millennials to still apply - and drive - in droves, because GenDyn has what they really want - high-wage jobs, something the moribund MoCo economy has failed to generate in the private sector over the last fourteen years.

Imagine the outcome of the General Dynamics race had our leaders wisely built the Dulles access planned for decades ago. Several perfect sites in the I-270 corridor would suddenly have been on the table. GenDyn wouldn't have worked for locations like downtown Bethesda, downtown Silver Spring or Pike & Rose, because they need a secure campus away from urban bustle.

When the next corporate HQ race begins, will we have those sites left, or will they all have been converted to residential? Will we still be no further toward a new Potomac River crossing to provide the Dulles Airport access international firms demand?

As impotent as Montgomery County has been in these private sector contests, our elected officials are even dropping the ball in attracting government jobs in recent times. County Executive Ike Leggett recently told the Washington Post that he decided unilaterally to pass on the tens-of-millions of dollars in economic development the FBI headquarters would have provided MoCo, solely so that his personal friend could reap the political windfall in Prince George's County.

Does that make you angry? It should. It raises, at a minimum, serious ethical questions. Have you heard anything about Montgomery pursuing the Transportation Security Administration headquarters, now that it's back on the regional table again?

How about a bid for the new Washington Redskins stadium? We just passed on D.C. United, despite having likely the largest concentration of United fans in the region within Montgomery County.

The Redskins won't change their name, and District officials have - to our advantage - decided to cut off their nose to spite their face, by requiring a name change before wooing them back to DC. Putting politics over the economic best interests of your constituents? Hmm....that sounds familiar.

Loudoun is already negotiating. Where is Montgomery County?

The same place we always are under the "leadership" of the Montgomery County political machine. Asleep at the switch. Ninth runner up. Last place. Loser.

Term limits, anybody?
Posted by Robert Dyer at 10:00 AM