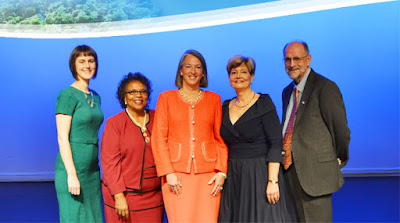 Rockville's budget season is officially underway, and a preview of the FY-2017 budget was presented to the Mayor and Council at last night's regular meeting by Deputy Director of Finance Stacey Webster. Some information will not be available until the February 8 meeting, including whether or not tax increases - such as the property tax - will be necessary.

But if the Mayor and Council accept the general outline presented by staff last night, there would be a 5-6% increase in trash fees, and a two-cent hike in what commercial property owners at Rockville Town Square pay toward the parking fund annually. Mayor Bridget Donnell Newton asked what that spike in trash fees would cost the average Rockville resident. Webster said it would be about $20 to $25 out of residents' pockets in FY-17. She said a number of factors led to the suggested increase, including a renegotiated city refuse agreement, new vehicle purchases, and labor costs.

Finance Director Gavin Cohen said the Rockville Town Square parking tax hike would cost property owners there about $12,000. He added that the new revenue would help cover the installation and adoption of "smart" parking meters.

Councilmember Mark Pierzchala, known for being well-prepared for meetings, identified a discrepancy in the newest unassigned reserves figure for FY-17. He noted it was now below the target established in the FY-16 budget. Webster explained that the number had to be revised due to new concerns about revenue, particularly in light of the Wynne decision and the recent mistake by the Maryland Comptroller's office in allocation of revenues to municipalities such as Rockville. The latter gaffe means the City will likely have to return an unknown amount of funds it mistakenly received from Annapolis.

In the context of those concerns, Webster said, she did not recommend the City reduce the property tax at this time. Councilmember Beryl Feinberg asked her colleagues if there was any inclination among the body to pursue a property tax reduction or credit for FY-17. There appeared to be no takers. Pierzchala said he was not only concerned about the factors Webster mentioned, but about the increasing forecasts of another national recession.

Webster said that Rockville is in a position to keep water and sewer fees flat this year, but cautioned against reducing the amount of unassigned reserves. She said the money that would free up would likely be outweighed by the negative message such a move would send to bond rating agencies, upon whom staff had impressed last year's increased commitment to reserve funding. Webster said those agencies expect the City to continue on that course to retain its prized Aaa bond rating.

With the recent election having just passed, the Mayor and Council also sought to deliver on promises made during the 2015 campaign. Newton noted that the Rockville Senior Center is in urgent need of both a full-time social worker, and a dedicated staff member who can help manage the aging-in-place Village programs being established across the city. She also pressed for one of her top priorities, increasing the number of police officers in the city. Newton said Rockviille's population, demographics and law enforcement challenges are not what they were 30 years ago. Rockville Police Chief Terry Treschuk concurred with the Mayor's comments. "It's time we had a frank discussion about the Police Department in this city," Treschuk said, "and lay it all on the table."

Pierzchala said he was hesitant to add signifcant numbers of new officers without first examining how current personnel are deployed and other efficiency options. Newton and Treschuk's remarks suggested that such analysis would be part of the overall discussion. But Newton argued that additions to the force are clearly warranted, with Rockville officers answering over 70% of calls within the city last year. She said Montgomery County officials have told her the efforts of the Rockville Police have allowed County Police assets to be redeployed to other priorities.

Feinberg brought up another proposal supported by several candidates last fall, the construction of additional recreation centers around the city. She suggested Potomac Woods Park as a prime location, because it already has utility lines running out to it, and existing recreational facilities in place.

Newton encouraged residents and staff to come forward with needs that could be addressed in this budget, saying it is important that the document reflect their priorities while maintaining the City's sound financial management.

Photo courtesy City of Rockville
Posted by Robert Dyer at 8:30 AM