Montgomery County's political machine is in full panic mode as public opposition to the County government's monopoly control of liquor increases in volume. Punches are being thrown, and landing. But new government signs printed at taxpayer expense are threatening those very taxpayers with "sky is falling" outcomes and punishments, should the unwashed masses dare to boot Big County Government out of the liquor business at the ballot box this November. This follows another taxpayer-funded propaganda campaign to maintain the monopoly that I reported on just yesterday.

The County is even using schoolchildren as human shields, threatening to derail construction projects at Walt Whitman, Pyle, Ashburton, East Silver Spring, Greencastle, Montgomery Knolls, Pinecrest, Piney Branch, Woodlin, Christa McAuliffe and Col. E. Brooke Lee if voters reject the government liquor monopoly. This even as many of the same elected officials are clamoring to approve classroom-busting, high-density development in those same school clusters in the coming months. Oops. 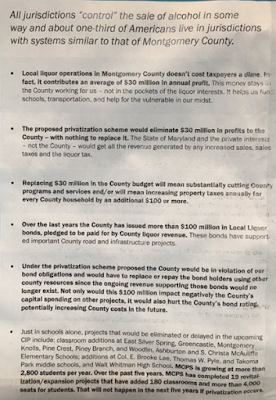 What else will happen if you pursue your quest for better beer and wine lists, and the right to purchase Bud Light at CVS?

Here's a good one - the monopoly actually touts its authority to keep certain liquor products it arbitrarily decides are a little too wild for you, the heavy-tax-paying adult, out of your hands. Boasting of its "power to exclude" certain products - now there's a heckuva way to convince residents that this is a good system. Just what we want: less choice, right?

They also made another gaffe in the process - they state that Montgomery County is only the second-best jurisdiction in Maryland when it comes to alcohol abuse and drunk-driving accidents. So we're not the healthiest in America, as our elected officials boasted? No, not even in the state, according to the County's own propaganda.

Councilmember George Leventhal tussled on Facebook with restaurateur Roberto Pietrobono (Gringos & Mariachis, Olazzo), who asked, "At what point in time would you be fed up if you were in our position as restaurant owners? For me it's been 15 years." Leventhal replied that he hoped the proposed "special orders" change would solve Pietrobono's woes.

Alas, as regular readers here already know, the "special orders" plan won't do that. It will allow the Department of Liquor Control to retain the power to declare which products are special order. It will allow the DLC to levy a tax on those new private liquor transactions, which as anyone who knows about business realizes, will raise the cost of product for consumers and hospitality businesses (of course, the County Council is not known for its vast knowledge of operating businesses). How does that make Montgomery County competitive with the District again?

Are you smart enough to decide the fate of liquor control in Montgomery County?

According to the Sentinel newspaper, Councilmember Leventhal says you aren't. Of Leventhal's opposition to a ballot referendum on the issue, the Sentinel reported "he did not think voters should decide whether to privatize alcohol because they would not understand how it would affect the county.

Leventhal posted that he thought only restaurant industry insiders were concerned about the County having monopoly control of liquor. But his colleague, Councilmember Hans Riemer, who also favors government retaining monopoly control, recently acknowledged the biggest complaint heard is the inability to buy beer and wine at grocery stores.

It's clear that the people have spoken. Now, will the politicians listen?

As a resident, is your current inability to buy Bud Light or a bottle of chardonnay at Giant, and your being forced to pay more for alcohol than those in the District, really "of little interest" to you?
Posted by Robert Dyer at 8:00 AM