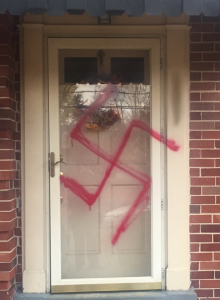 Montgomery County Police are investigating an incident of vandalism in Silver Spring they believe is "bias-based." On Sunday morning, a Donald Trump supporter in the Four Corners neighborhood in Silver Spring awoke to find a swastika had been spray painted on his front storm door, and his American flag had been stolen. Police responded to the home in the 200 block of Williamsburg Drive at 7:22 AM.

A preliminary investigation determined that this was the third time the Trump supporter's home had been targeted. The home was previously vandalized on October 16, police said, and a Trump-Pence sign was stolen from the front yard of the property in late October.

This incident shows the danger of jumping to conclusions, as the Montgomery County Council has, in regard to a handful of hate-based vandalism incidents since the election. With no evidence, and not a single suspect having been arrested and questioned, our County Council has alleged these incidents were inspired by Trump and/or perpetrated by his supporters.

The Council has now been wrong twice in the last week; the only physical hate violence in the County so far has been directed against a Trump supporter, during a student protest last Wednesday in Rockville. And now in Four Corners, the only case where we have a clear motive, all evidence again points to anti-Trump forces.

Fortunately, the police are not taking a political approach, and are examining all cases objectively in their investigations. In a statement, detectives said they believe the homeowner's support for Trump is the motivation for the thefts and vandalism in the Four Corners case.

Anyone with information about these thefts or the vandalism incidents is asked to contact the 3rd District Investigative Section at 240-773-6870.  For those who wish to remain anonymous, Crime Solvers of Montgomery County is offering a reward of up to $10,000 for any information that leads to the arrest of the suspect(s).  Tipsters can call Crime Solvers of Montgomery County toll-free at 1-866-411-TIPS (8477).