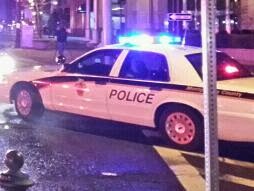 Two people were stabbed last night in the 400 block of N. Horners Lane around 10:15 PM. Rockville police found the two victims and a third person outside a home. The third person retreated into the home, saying he had a gun. Montgomery County police assisted with an Emergency Response Team, getting the man to come out of the home and surrender.

He is identified as Dakota Shaynne Jones (DOB: 3/19/1988), of the 300 block of Howard Ave., in Rockville. Jones was arrested and charged with the following:

The two stabbing victims were taken to a local hospital; their injuries were non-life-threatening, police say.

Anyone with information about this incident should call the Rockville City Police Department's Criminal Investigations Unit at 240-314-8938.
Posted by Robert Dyer at 9:15 AM